Vilma Santos long successful television career started with musical variety show, The Sensations with love team, Edgar Mortiz and other teen singing sensations like Perla Adea, Esperanza Fabon, Rommy Mallari and Eddie Perigrina. She followed this up, with a drama anthology in Dalambuhay ni Rosa Vilma. The mid to late 70s, Vilma ventured again into the musical variety genre with a string of shows like, Ayan Eh, Vilma Santos Special Engagements and Vilma In Person until settling down with her top rated long-running show, Vilma! Vilma! became one of the most successful TV show in Philippines television history. Armed with its lavish opening production number, it became the highest rated and advertisement haven from early to late 1990s. Vilma’s decision to settled down with her marriage to Senator Ralph Recto and her pregnancy with her youngest son, Ryan Christian halted the success of Vilma! and eventually resulted to the shows ending. – Global Vilmanians (READ MORE)

Bring Back “Vilma!” The Greatest Musical Variety Show Ever! — In the 1980’s, Nora Aunor’s Superstar show was losing viewership and her box-office appeal was also in question. Suddenly, the 70’s superstar was being eclipsed by a non-singer but an excellent dancer and versatile actress Vilma Santos. She has just scored her first of four grand slams for the movie Relasyon and continued to reign as the Longest Box-office Queen of Philippine Cinema. And slowly but surely, her VIP (Vilma In Person) TV show was gaining patronage/high ratings too from the precious class ABC households nationwide, TV advertisers’ prime target audience for their products.

Smart Move — There was no stopping Vilma Santos. She was about to conquer the TV musical-variety genre where Nora Aunor ruled for years. Early on, Vilma Santos had rough sailings with her musical variety show. VIP was being broadcast from Channel 2 which had a bad reception among TV homes nationwide, and was no match to the more modern RPN Channel 9 where Nora’s Superstar show was simultaneously shown from Luzon to Mindanao in vivid, crisp color. When VIP moved to GMA Channel 7, it was the best move that Vilma’s think tank ever did. With better satellites, shrewd marketing, state of the art facilities, and more ambitious production numbers and with the Dancing Queen Vilma at the center of it all, and with the genius of Maribeth Bichara’s choreography and musical concepts written all over the show – “Vilma!” became the most watched and the most awarded TV show in the musical/variety category.

52 — Every Friday, 52 weeks a year, there was Vilma Santos’ most awaited opening number that never failed to surprised, amused and elicited ooohhhs and aaahhhs as the TV Musical Variety Queen won the hearts of music and dance aficionados here and abroad. Who would ever forget these outstanding, well-rehearsed, high performance level and unforgettable numbers?

Madonna — The Madonna Material Girl number, which would make Madonna proud. She sashays, gyrates and pirouettes ala Tina Turner for Vilma’s version of Private Dancer.? (“I’m your private dancer, a dancer for money, do what you want me to do?” Talbog ang Burlesk Queen! My most memorable Maribeth B. and Vilma Santos sexy number was when they showed their legs and swing those hips as the Swing Out Sisters belt out their number one hit Breakout… The “A Chorus Line” ensemble, “On Broadway” with Queen Vilma leading the group with a hat, gloves, a cane and a glossy costume. Who would ever forget her swing number with then sweetheart Ralph Recto? Or a dance number with the late Nida Blanca? Or a naughty, haughty dance number La Conga, sung by Gloria Stefan? And many, many more production numbers that were shot from Luzon to Mindanao, and even in the U.S., like The Raging Waters in California.

Imitated — Vilma! was imitated but never equaled by the fly by night copycats: Snooky Serna, Maricel Soriano, even Alma Moreno in Love-liness. Sharon stuck to singing and wers-wers English. At one time, Nora Aunor was guest. Pinaluhod lahat sila ni Ms. Vilma Santos! Whenever a Regal or a Viva movie promo was in progress, they all trooped to the ratings winner Vilma! From GMA studio, to the Metropolitan Theater, Vilma! made history. From the cha-cha, the boogie, to tinikling to meringue and the swing – Vilma did them all. She was everybody’s Ate Vi or Tita Vi.The TV Queen. The Dancing Queen, and how!

She followed this up, with a drama anthology in Dalambuhay ni Rosa Vilma. The mid to late 70s, Vilma ventured again into the musical variety genre with a string of shows like, Ayan Eh, Vilma Santos Special Engagements and Vilma In Person until settling down with her top rated long-running show, Vilma!

Vilma! became one of the most successful TV show in Philippines television history. Armed with its lavish opening production number, it became the highest rated and advertisement haven from early to late 1990s. Vilma’s decision to settled down with her marriage to Senator Ralph Recto and her pregnancy with her youngest son, Ryan Christian halted the success of Vilma! and eventually resulted to the shows ending.

Where You Belong – “…Channel 7 first presented its new station identification at the Philippine International Convenstion Center last Nov. 13 during the celebration of Vilma Santos’25th anniversary in showbiz. To the GMA-7 staff, the 30-seconder aptly summarizes the realization of a dream they all shared when a new management team began running the affairs of the station. And that is to build the tallest tower in town and establish the widest coverage area. The new station ID opens with a collage of GMA-7’s provincial stations, through such landmarks as the Mayon Volcano in Albay, Magellan’s Cross in Cebu, the vintas of Mindanao, which symolize network’s wide coverage area. The next sequence shows laser beams shooting up and out from the tips of GMA’s provincial tv towers, the beams subsequently merging to form Channel 7’s tower of power resting on the Phillipine map. The new tower is now under construction and will be pressed into service by the first quarter of 1988. Upon completion, the 777-foot high tv tower will be the highest structure in the country. From the technical aspect, the tower will widen the primary coverage area of Channel 7 and further enhance its signal to its provincial relay and affiliate stations. Channel 7’s new station ID ends with the tower of power resting on the relief map of the Philippines flipping out to reveal the GMA corporate logo underneath and Channel 7’s slogan – “Where You Belong”- being spelled out on the screen. GMA Channel 7 president Menardo R. Jimenez says, “Channel 7 will continue with its improvement program, in terms of people, program and facility upgrading as broadcasters; it is our sacred duty, to utilize the medium for nation building and help in the economics and the spiritual uplift of our people…” – JC Nigado, Manila Standard, 03 Dec 1987 p11 (READ MORE)

Once There Was a Love – “…Aga’s on and off career worked to a great disadvantage, making producers and fans shun away from him. However, his wholesome, totally refreshing and boyishly-appealing look makes him adorable on screen. His latest TV opus with Vilma Santos titled “Once There Was a Love” was a success prompting many producers to get him again in the movies. Asked why his carer never really took off, he says: “Well, I lack the much-needed support in my career. There were many times I’m almost there, tapos wala namang kasunod agad; so napaglilipasan agad, di ba? I am also partly to be blamed because I was in a limbo for a while. All I know and care about is that I have the money spend on luxurious cars, squash, water sports and my nightlife. I also keep on changing managers.” This year, Aga is quite determined to become serious with his career. he’s slated to do movies outside Regal Films – for RJ Films, Seiko and Viva. It also means having to lose weight for his comeback on the big screen. He says: “I want to look really good when I start doing more movies this year. I’m on a liquid diet. I don’t eat anything. For the meantime I only drink juice, water and slim-fast.” Aside from cutting his food intake, Aga likewise cuts his expenses. “I’m really saving for the future now. I can’t afford to maintain more expensive cars (at the moment he only owns two European cars, a 230-E and a 7-35). I also have to do away with my water sports for awhile. Alam ko ang mawalan ng pera and one thing with me, I never run to my parents to ask for some if I need it. Ever since I started working at afe 14, I’m my own…” – Jackie R, Manila Standard, 09 Jan 2013, p17 (READ MORE)

Vilma Turns 35 – “…Top movie actress and tv host Vilma Santos celebrated her 35th birh anniversary today. As a fitting tribute, a two-week celebration is going to be presented on her top-rating show, Vilma, tomorrow and on Nov. 11. Santos has been in the business for 26 years now and there is never a year in her memorable career that she did not come up with small and big surprises. For this year, it looks like she’s limited herself to only two movies (Pahiram ng Isang Umaga, the actress says, is going to be shown before the year ends), but her tv show has earned for her added success. Last Oct. 6, we saw Ging, her second movie as a child star in Channel 13’s Golden Tagalog Classic and even then, she showed that she was to the screen born. The hardworking actress’ never-ending search for new things to learn and her amazing determination to succeed have made her the longest reigning and highest paid movie and tv queen. No wonder, until now she still gets the juiciest movie and tv offers and the meatiest roles to portray Indeed, at 35, Santos has made her showbiz, years well accounted for – and how…GMA-7’s “Seven Days to Remember in November”kicks off on Nov 7 with Lamat sa Kristal, a two-hour Vilma Santos drama special; Nov 8 – Double Title Fight with Sugar Ray Leonard vs. Donny “Golden Boy” Lalonde live via satellite from the Cesar’s Palace at 10:30 a.m. (Manila time); Nov 9 – GMA Gems presents Windmills of the Gods; Nov 10 – Jake and the Fat Man; Nov 11 – Vilma Birthday Presentation 2; Nov 12 – Martin Nievera’s show MAD goes live; and Nov 13 – the NBA Games More special shows from the station’s regular programs are going to be shown from day one to seven…” – Meg Mendoza, Manila Standard, 03 Nov 1988, p25 (READ MORE)

Consistent Winner – “…When BBC-2 closed shop after EDSA, Helen returned to Channel 7 where she got her old Sunday afternoon slot –plus an additional job as newscaster for the station. Also dislocated with the closure of BBC-2 was Vilma Santos’ variety program Vilma in Person or VIP. Vilma in Person – in spite of the fact that it was given the VIP treatment by the Benedicto management – never did well in the ratings game when it was with the old Channel 2. But when it moved to Channel 7 – where it was called Vilma, the show immediately shot up in the ratings chart. Vilma! had grand productions week after week and was a consistent winner in the various awards races in the field of television. It went off the air in 1995 only because Vilma got pregnant with Ryan Christian and needed to have a complete rest…” – Butch Francisco, Star, 25 Aug 2001 (READ MORE) 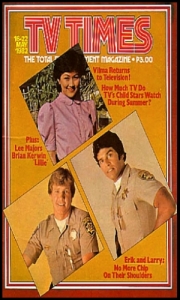