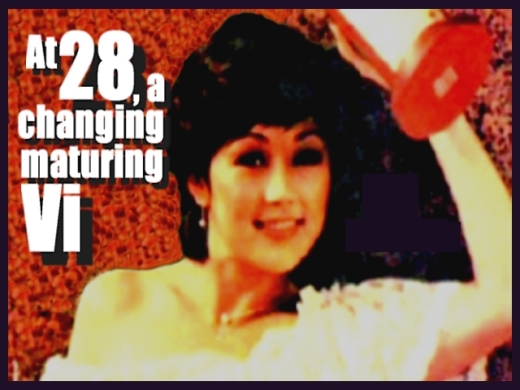 I didn’t snub the Metro Manila Filmfest by not attending the awards night. And it’s not true I didn’t expect to win. I did my best in Karma and modesty aside, I knew I had a good chance of winning. But then I had little time left to prepare for the occasion. Duds and I were busy attending to construction workers at the time,” said a more vivacious and vibrant Vilma Santos, adjudged best actress of the 1981 Metro Manila Film Festival for her scintillating performance in Karma, about reincarnation and love eternal.

Vi and hubby Edu are busy looking after the building of their two-storey house on a 683 sqm.lot in United Paranque, Metro Manila. “I’m proud and happy that this is Dud’s gift to me and Lucky,” said Vilma, beaming with joy. “This house is too big for a small family like ours,” she added, referring to the Magallanes house where they’re staying. “We hope to transfer to our new home before the end of the month.” Which also means that Vi is selling her five-bedroom home, complete with swimming pool. The house and lot are being sold for P 1.6 million. “What will I do with a big house like this? We only occupy one room. Maintaining and cleaning the other rooms will just eat up our time. We have other things to pay attention to,” rationalized Vi.

Does the sale have something to do with her BIR problems as some detractors would have it? “Some people are always watching to see what’s your next move. So what if I sell it? I’m not selling somebody else’s property. I know what’s good for me and I know what’s not! My detractors might also want to know that I don’t have any BIR problems any more. I’m thankful to the BIR for helping me,” said Vi, a little tense. At age 28, Vilma Santos’ life is now, “very different” from when she was single. She still has time for friends and reporters, “but I can no longer spend all my time with them now. If people can only see my timetable, they’ll know that I shoot six times a week. I only have Sundays for my family. That one day I don’t want to take away from them,” she said. “But I see to it that I meet my friends at least twice a month. I hope they’ll understand.”

As a married woman, Vilma does not keep a circle of friends. “Frankly, I’ve never had a barkada. Ang barkada ko talaga ay ang pamilya ko. Anyway, my female colleagues from the movies are all my friends.” Vilma denied reports that Edu has been limiting her public appearances. “I want it known that Doods is a very understanding husband. He has nothing against my movie career. He just wants me to give priority to my family and I think he is right. The freedom that he gives me is enough for me not to abuse it,” she said, to straighten out rumors that Edu had asked her to quit acting and that they plan to settle in Canada or in the States. “We’re planning to leave for the US but for a short pleasure trip only.”

Another remarkbale change in Vi is that she can no longer shoot several movies simultaneously. The most is two pictures at a time. Her own ceiling is five movies a year. Before, she used to make an average of one picture a month. She has become choosy about accepting film offers. “At this stage of my career, I can only portray roles that suit my status in real life. Can you imagine a wife and mother playing the role of a carefree, innocent, sweet teenager? I believe that an actress should grow up in her roles. One can’t be a nina bonita forever,” she philosophized.

So far, Vi has accepted only two major film assignments: Relasyon, where she plays mistress to Christopher de Leon; and a still untitled movie to be directed by Eddie Garcia under Viva Films. She has other offers from Sining Silangan, Cinex Films and Mirick Productions, but she is studying them carefully. Vi is managing her own movie career now. Before, she would ask somebody to transact the business with film producers in her behalf. “I was to spoiled and very dependent. But now, I talk business directly with them.” Vi has also limited her alalay to a few. The new set-up challenges Vilma.

This makes life for her more colorful and exciting, and she doesn’t have to have a battery of PROs. “Why should I hire so many of them if I’m trying to do some saving now? Of course, I still need them but I hope they give me a break.” Vilma’s latest MMFF best actress trophy is her fifth major award. She won the FAMAS best actress plum in 1972 for a superb characterization in Dama de Noche. She also won the MMFF best actress statuette for Burlesk Queen in 1977. As a child actress, she romped away (FAMAS) for Trudis Liit, aside from the best actress award she won in 1975 Bacolod City Film Festival for Nakakahiya? Vi sends her heartfelt thanks to Chanda Romero, her co-star in Karma, for her inspiring remarks on awards night:“Lucky girl this Vilma. may Edu na. May Lucky na, may trophy pa!” Vi said she was so touched by Chanda’s unselfish remarks, she tried to reach Chanda by phone, to thank her but she couldn’t.

Vi also extends warmest thanks to her Tito Ed (Rodriguez) for commenting that she, Vilma, is “your favorite and mine.” “For their superlative compliments, I look forward to 1982.” Right now, Vi’s main concern is her son Lucky (born Luis Philippe Manzano eight months ago). Vi and Edu do not approve of their son being public property. There’s nothing wrong with being a movie star, they say.  After all, acting can be ‘inherited’ by their son. But the couple will not go out of their way to force their son into the showbiz world. “I want him to lead a normal life and not to be deprived of the privacy he’s entitled to,” Vi reasoned. One thing sure, she will see to it that Lucky finishes his studies. “ We will not rule his future life. He will decide for himself. If he has artistic leanings, we cannot stop him.  But, repeat, we will not force him to pursue anything he doesn’t like!”

Vi has many things to thank for. First, she has survived keen and cut throat competition for the past many years. Despite new and fresh talents on the scene, she has managed to keep a steady following. All her recent movies have been blockbusters. She’s glad her fans when she was 16 are still her fans today. “Oh yes, just like me, they have matured and grown up. They are the type who do not invade one’s privacy. They know their limitations. But they’re always concerned whenever they hear unpleasant news about me and my family.” Vi is happy that people flock to her movies not because of the ‘boldness’ of the story but because of the character she plays. Posing with her festival trophy, she said with supreme confidence,“ I’ll continue acting so long as my fans like me. From hereon, I promise to make movies that are relevant and will be appreciated by the public.” – Manny B. Fernandez, People magazine, Jan 15, 1982