An unusual story of three people caught in the unexplainable intricacies of love and need. The five year old relationship of Rex and Tere is put to a test as Sandra, the kooky, talented and aggressive designer rocks the picture perfect and peaceful relationship. The solid and unruffled engagement cracks as Rex is immediately smitten by Sandra’s dynamic persona. The film features the superstar team-up of award winning artists Nora Aunor and Vilma Santos and the drama king, Christopher de Leon. – Database of Philippine Movies

Film Reviews: “…After 37 years, Ikaw Ay Akin becomes a materialist indictment of the patriarchal deceit cisgender passion must contend with, opening up the queerness that emerges from feminine confidence as zone of alternative feelings. And, of course, Nora still punctures the assault with an imperturbable will to punctuate the sentence, despite the adages of her time failing to utter competitive affection, convincing Vilma that the encounter isn’t just about female rivalry, but also masculine decadence…” – J. Pilapil Jacobo, Young Critics Circle Film Desk, 21 November 2015 (READ MORE)

“Ikaw ay Akin” is the latest addition to Ishmael Bernal’s continuing attempt to portray how people and relationships are at once simple and complex. It is also the most engaging local movie shown this year, once again proving that the marriage of commerce and art can be remarkably fruitful. Those who expect the film to be one of those triangles of the “Sapagkat Kami’y Tao Lamang” variety will be disappointed. Made with taste and finesse uncommon in Pilipino movies. “Ikaw” surveys the interactions of three people caught in the unexplainable intricacies of need and love.

Rex, the young executive of a jeepney-producing firm, has been going steady with Tere, a demure orchid expert, for five years. Theirs is the kind of self-satisfied relationship that results from along, unruffled engagement. That is until he meets Sandra. An artist-designer, Sandra is kooky, talkative, aggressive career girl who is also neurotic, chain-smoking, tranquilizer-gulping, phobia-laden product of a broken family. Rex is immediately attracted to Sandra’s seemingly boundless energy. Compared to her, Tere is a calm, reserved, efficient, level-headed woman who looks totally in control of herself.

The “menage-a-trois” is then sensitively laid out for viewers to look into the hurts and joys, hesitations and decisions, delights and agonies of each character. At film’s end nothing is really resolved. Most loyal viewers will be revolted by this ambiguity. To get their money’s worth, they feel they must be sure “kung kanino talaga napunta si Christopher, kay Nora ba o Vilma?” But Bernal is not so much concerned with fulfilling audience expectations than with putting across his message: that no one can totally, absolutely, fully own another human being. The best thing is to understand the needs of a person and love him according to his limitations. This is evident in the lines of Rex, whose character we completely grasp only as the film nears its conclusion. Rex tells Tere: “Kailangan ako ni Sandra hindi lamang sa pisikal kundi sa emosyonal din. Tulad ng pangangailangan ko sa iyo. Sa kanya, parang nagkaroon ako ng gamit. Kailangan ko kayong dalawa para mabuo ako.” To Sandra, he says later: “Si Tere, tinaggap nang hindi niya ako maaangkin nang buong-buo. Kung sasabihin mong nakuha mo nang buong-buo ang isang bagay, kulang pa rin.”

Unlike other superstar team-ups that fail to exploit the golden opportunity of pulling in sure audiences to watch a serious work, Bernal’s greatest achievement lies not so much in putting his three big stars together but in making use of them to lure their fans and followers intos eeing a mature, sensible film. And his cast serves Bernal very well. In the hands of a capable director, Christopher de Leon proves that his forgettable appearance in such odious films as “Topo-Topo Barega” and “Disco Fever” are mere lapses in judgment that do not entirely discredit his craft. He also shows enough gallantry by not getting into the way of his leading ladies, whose roles are undoubtedly more demanding than his. As the uptight Sandra, Vilma Santos has the script’s choicest, wittiest lines. She makes the most of them and succeeds in giving a fairly accurate portrait of an emotionally insecure young woman. And when she tells Rex: “sabi nila liberated ako, front lang. Kalog daw, front din. Alam mo namang kulang-kulang ako. Pag wala ka, magkakalat ako. Para akong manok, takbo ng takbo wala namang ulo.” She likewise handles her final breakdown exceedingly well. Nora has less lines but she nevertheless manages to conveys her emotions very effectively. In that family reunion-party which is so engrossed in gossip and banter, she remains so detached, speaking nary a word — a triumph for both Bernal and her. The hurt in her eyes continues to build up until that disrupted dinner scene where she rushes to her room and, unable to contain herself, finally cries. The most stable of the three, you could really believe her when she tells Rex: “Galit ako sa ‘king sarili, dahil sinasaktan mo na ako nang todo-todo pero lalo ka namang napapamahal sa akin.”

The film is greatly enhanced by Jose Carreon’s vibrant script, Mel Chionglo’s superb production design, the Vanishing Tribe’s fine musical score, and Augusto Salvador’s brisk editing (few scenes last longer than a couple of minutes). But the lion’s share of credit goes to Bernal. I particularly like his splendid use of meaningful pauses and oppressive silences, as in Sandra and Tere’s accidental first meeting at Rex’s house, Sandra’s soundless dinner with her father that leads to her breakdown, and the long, quiet ending scene where Sandra and Tere never say a word and yet succeed in finally communicating with each other. Our viewers are discomfited by this exhausting process, what with the underdeveloped tastes of our mass audience perpetuated by irresponsible irectors. But one fervently hopes for Bernal, who apparently believes he owes the audience his best even if they are more likely to love his third best more, that they would get the film’s message and, perhaps, even accept and like it. – Mario E. Bautista, Philippine Daily Express, 1978

“…“Ikaw Ay Akin,” 1978, Ishmael Bernal. A refreshing change of role for the superstar, cast here as a smart and sophisticated horticulturist at odds with best friend and real-life rival Vilma Santos. Notable for its experimental and long closing shot of the two friends’ reunion, with only their eyes talking…” – Mario A. Hernando, Philippine Daily Inquirer, 01 October 2011 (READ MORE)

Silent Confrontation – “…The movie brings together fierce cinema rivals Aunor and Vilma Santos as well as Aunor’s then-husband, Christopher de Leon. Skydiving enthusiast Rex (De Leon) and horticulturist Tere (Aunor) are in a stable relationship until the arrival of Sandra (Santos), a liberal-minded artist. Rex embarks on an affair with her, then becomes overcome with guilt when Tere discovers the relationship. Ikaw ay Akin is best known for the “silent” confrontation scene between Aunor and Santos, where neither speak a single line and communicate by just staring at each other…” – Coconuts Manila, 27 July 2018 (READ MORE) 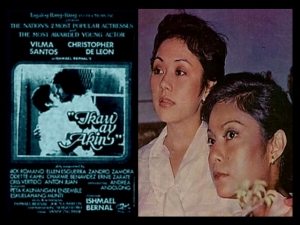