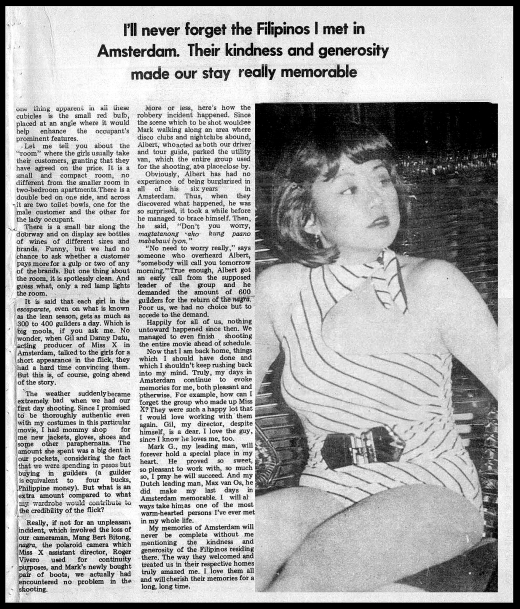 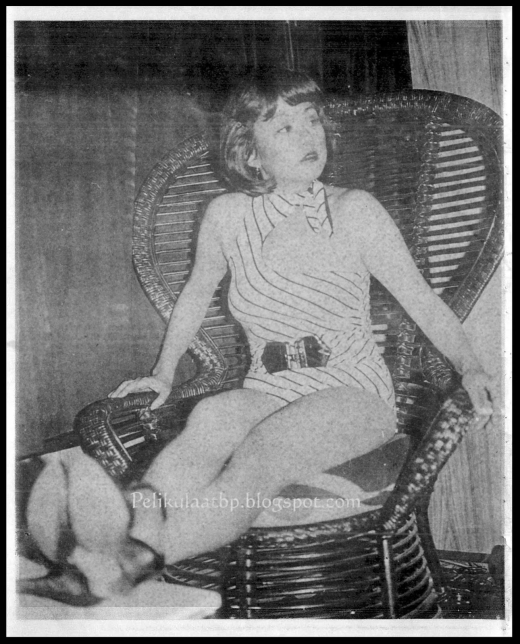 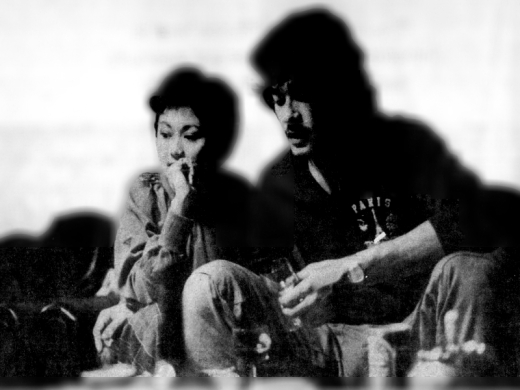 There was both sunshine and a little rain when the KLM 747 flight which took us from Manila to Amsterdam finally landed at the Amsterdam Schipol airport. The air terminal was huge, but bigger was the crowd, mostly Filipinos residing in Amsterdam, who welcomed us. Although there were happy smiles in their faces, I eagerly looked around for familiar faces. Sure enough, Gil Portes, my Miss X director, and Mark Gil, my leading man, were there. Both waved happily at me. I waved back at them.

“Where to now?” I heard my mommy ask Gil when all the proper and necessary introductions were conducted. “Since it is a Sunday,” Gil suggests, “Why don’t we hear mass at the church of the Bigginhoff?” The church is situated in a strategic area, along several residential houses, and it is one of the only two Catholic churches in Amsterdam. Since between the two churches, it is the Bigginhoff which celebrates one mass in English, it is where most Filipinos attend their Sunday mass. The front yard of the church, after the mass, serves as a melting pot of sorts for most Filipinos. It si here where they renew acquaintances, exchange tete-a-tete, or get the latest tsismis about a fellow Filipinos. It is in this area where my group and I chanced upon Eddie Gutierrez, who was on the last leg of his European tour. Eddie works as a promotional salesman for Belcraft International, a firm which has its main office in Canada and which specializes in household wares.

We had a hearty meal at the Aide residence (the man of the house, Albert, is a jolly fellow; we all think he would do well as a comedian. Gil and his group stayed with him and his wife, Mila, and their only daughter, four year old Rachel) with the newly assigned utility girl for the production, Batangas beauty, Rose Perez, and her assistant, Arthur Dotollo, serving us their own concoction of Filipino dishes. Actually, it was because of Rose and Arthur and, of course, my mommy why we never missed a serving of whatever Filipino food that catches our fancy.

In any case, you would think that because of the seemingly endless 20-hour flight we went through, I would choose to have a long nap after meal. No, I didn’t. Instead, right after we had unpacked our luggage at the house assigned to us (located at 24 Vanhouweningestraat and owned by Chit Mallo), I asked Gil and Mark to accompany me in making rounds of Amsterdam. Since they’d come ahead of me; they mush know the place like hell, I even kidded them.

“But Vi, stores in Amsterdam are closed on Sundays, ” Gil warned me. Apparently, he thought I wanted to go on a shopping spree, as is the usual case among woman travelers. “But Gil,” I reasoned, “at least, give me the chance to get the “feel” of Amsterdam before we start shooting tomorrow morning.” Indeed, I wanted, in particular, to ge the ambiance of the popular “red light” district before we finally explore the area for the much-needed highlights in Miss X.

As expected, touring the entire Red Light district, watching the girls do their “thing” inside their display windows and accommodating a customer for a 15-.minute moment of pleasure was a truly marvelous experience. But mind you, the girls have class, and with a capital C, no less.

There is no age limit among the participants, I noticed. Thus, there are girls on display who appeared even much younger than my sister Winnie (and she is 17), while a few looked old enough to be grandmothers. But most of the girls are about 18 and above. Sila rin and pinuputakti ng mga marino. Where their dressing habits are concerned, there seems no particular requirements. So, you see them clad in different attires, but mostly the attires enhance the girls’ ’exiness. But they are quite expensive attires. There are a few, though, who take to wearing just a panty and a bra. Me, when my turn came to be “one among them,” I chose to wear a fiorrucci one-piece bathing suit, Ano, patatalbog?

Inside their “cubicle,” actually the size of an ordinary excaparate which can house one mannequin, the girls can pose any way they want. Hence, you find someone sitting atop a table reading a book or a magazine. Or, there is one in a reclining position and she usually has for company her dog. Yes, kahit sa pagdi-display sa sarili, kanya kanya silang patalbugan. But one thing apparent in all these cubicles is the small red bulb, placed at an angle where it would help enhance the occupant’s prominent features.

Let me tell ou about the “room” where the girls usually take their customers, granting that they have agreed on the price. It is a small and compact room, no different from the smaller room in two-bedroom apartments. There is a double bed on one side, and across it are two toilet bowls, one for the male customer and the other for the lady occupant.

There is a small bar along the doorway and on display are bottles of wine of different sizes and brands. Funny, but we had no chance to ask whether a customer pays more for a gulp or two of any of the brands. But one thing about the room, it si spotlessly clean. And guess what, only a red lamp lights the room.

It is said that each girl in the escaparate, even on what is known as the lean season, gets as much as 300 to 400 guilders a day. Which is big moola, if you ask me. No wonder, when Gil and Danny Datu, acting producer of Miss X in Amsterdam, talked to the girls for a short appearance in the flick, they had a hard time convincing them. But it is of course, going ahead of the story.

The weather suddenly became extremely bad when we had our first day of shooting. Since I promised to be thoroughly authentic even with my costumes in this particular movie, I had mommy shop for me new jackets, gloves, shoes and some other paraphernalia. The amount she spent was a big dent in our pockets, considering the fact that we were spending in pesos but buying in guilders (a guilder is equivalent to four bucks, Philippine money). But what is an extra amount compared to what my wardrobe would contribute to the credibility of the flick?

Really, if not for an unpleasant incident, which involved the loss of our cameraman, Mang Bert Bitong, Nagra, the Polaroid camera which Miss X assistant director, Roger Vivero used for continuity purposes, and Mark’s newly bought pair of boots, we actually had encountered no problem in the shooting.

More of less, here’s how the robbery incident happened. Since the scene which to be shot would see Mark walking along an area where disco clubs and nightclubs abound, Albert, who acted as both our driver and tour guide, parked the utility van, which the entire group used for the shooting at a place close by.

Obviously, Albert has had no experience of being burglarized in all of his six years in Amsterdam. Thus, when they discovered what happened, he was so surprised, it took a while before he managed to brace himself. Then, he said, “Don’t you worry, magtatanong ako kung paano mababai iyon.”

“No need to worry really,” say someone who overheard Albert, “somebody will call you tomorrow morning.” True enough, Albert got an early call from the supposed leader of the group and he demanded the amount of 600 guilders for the return of the nagra. Poor us, we had no choice but to accede to the demand.

Happily for all of us, nothing untoward happened since then. We managed to even finish shooting the entire movie ahead of schedule.

Now that I am back home, things which I should have done and which I shouldn’t keep rushing back into my mind. Truly, my days in Amsterdam continue to evoke memories for me, both pleasant and otherwise. For example, how can I forget the group who made up Miss X? They were such a happy lot that I would love working with them again. Gil, my director, despite himself, is a dear. I love the guy, since I know he loves me, too.

Mark G., my leading man, will forever hold a special place in my heart. He proved so sweet, so pleasant to work with, so much so, I pray he will succeed. And my Ductch leading man, Max van Os, he did make my last days in Amsterdam memorable. I will always take him as one of the most warm-heated persons I’ve ever met in my whole life.

My memories of Amsterdam will never be complete without me mentioning the kindness and generosity of the Filipinos residing there. The way they welcomed and treated us in their respective homes truly amazed me. I love them all and will cherish their memories for a long, long time. – “26 Days in Amsterdam” by Vilma Santos as told to Ethelwolda A. Ramos, Photographed by Bing Cruz, Expressweek December 20, 1979 Source: Pelikula At Iba Pa