Plot Description: Gina (Vilma Santos), a pleasant and witty young lady and Danny (Jay Ilagan), a suave, attractive young lad live parallel lives nurtured by single parents. In series of events, their parents meet and fall in love. Gina and Danny, though despising each other completely, are determined to separate their parents in the desire to win back their parents attention. Despite their efforts, their parents marry leaving Gina and Danny to live under one roof. Will this wreak havoc in the new household or will they learn to grow fond of each other? – Kabayan Central (READ MORE)

An entertaining romantic movie featuring two couples in love. The first couple is an elderly pair, he (Carlos Salazar) who has a possessive daughter, and she (Merle Tuazon) who has an equally possessive son. With the children played by Vilma Santos and Jay Ilagan, one feels he could predict the funny, wonderful ending of this joyous movie. Before the story is concluded, however, it unravels enough unexpected plot twists, and throws zingy one-liners that make the movie a pleasure to watch. Superstar Vilma Santos and Jay Ilagan are appealing actress, who delivers the most impressive performance with her controlled and understated acting style. Also stars Lilian Laing, Richard la Torre, and Gina Zablan. Directed by ace director Ishmael Bernal for Tagalog Ilang-Ilang Productions. – Trigon Video

Film Review: In a musical era of 1970s, “Inspiration” was quite an experimental film, with no musical numbers, better screenplay, well-written characters. Nestor and Bernal works well in establishing the character of Jay and Vilma. Their dialouges are not “corny” and very realistic. There is no over the top dramatic scenes inserted between musical numbers here. The parent played wonderfully by Merle Tuazon and Carlos Salazar were convincing. Although both Vilma and Jay played their roles effectively, Lilian Laing steals the film as Lola Jane. She was bubly and funny, a sex-starved, karate black belter, polo game afficianado, who loves life and considering she playing the old grandma who is also the solution to all the complication in life. Bernal was on his element here, a good story teller, pre-“Dalawang Pugad Isang Ibon, Pahiram Ng Isang Umaga and Relasyon.” Although he is directing a light comedy, written by Nestor Torre Jr., he managed to established all the characters without relying on corny dialouges common in this era. – RV, (READ MORE)

“…Jay was more talented than most. He looked cute as heck, but he also had a lot of depth to him. That unusually compelling combination of stellar attributes wasn’t lost on film people and the viewing public, and Jay went from one stellar assignment to the next with no end in sight—until his unfortunate weight gain. It was a truly tragic turn of events, because even his most avid fans among the country’s top filmmakers were forced to replace him with newer actors. For instance, in Lino Brocka’s “Tinimbang Ka Ngunit Kulang,” the male lead role went to Christopher de Leon. And, in “Maynila, Sa Mga Kuko ng Liwanag,” it was assigned to Bembol Roco. If the show biz grapevine is to be believed, therefore, it’s no exaggeration to say that, if Jay hadn’t gained all those pounds, there may not have been a Christopher or a Bembol—not as early as when they became stars on the rebound, anyway. We were fortunate to work with Jay in the early ’70s, when we directed him and his “secret love,” Hilda Koronel, in a Lea Productions photoplay. Their love affair was absolutely forbidden by their producer, but they were such good actors that they fooled everybody! Later, we wrote the script for “Inspiration” for Ishmael Bernal, and Jay starred in that memorable movie too, that time with Vilma Santos…” – Nestor U. Torre, Philippine Daily Inquirer, 24 Jan 2014 (READ MORE) 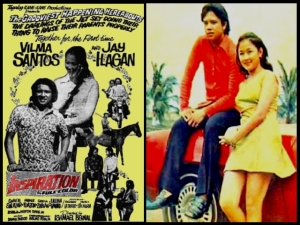