Film Review: “…By late 1969, movie producers had been tapping a Vilma Santos-Edgar Mortiz love team. Edgar was a Tawag ng Tanghalan winner. They started to be together in the movies, My Darling Eddie (1969) and The Jukebox King (1969)…In 1970, the love team of Vilma Santos and Edgar “Bobot” Mortiz was officially launched in the movie Young Love, together with the another popular love team during that time, Nora Aunor and Tirso Cruz III. The Vi and Bot love team went on to do 14 more movies in 1970—The Young Idols, Songs and Lovers, Sweethearts, Sixteen, Love Letters, Love is for the Two of Us, Mga Batang Bangketa, My Pledge of Love, Renee Rose, Baby Vi, Because You Are Mine, Edgar Loves Vilma, From the Bottom of My Heart, and I Love You Honey. All did well at the box-office…” – Rommel R. Llanes (READ MORE)

“…The loveteam of Edgar Mortiz and Vilma Santos endured a stiff competition from teeny bopper love team of Nora Aunor and Tirso Cruz III and came up with equal success with string of hit films during the musical era of the 70s. Together they did forgettable but commercial hits and also some hints of the years to come to Vilma Santos’ long career. The most notable one: Dama De Noche. Total Number of films with Vilma Santos – 25 (Young Love, Teenage Jamboree, Songs and Lovers, Renee Rose, My Pledge of Love, Mga Batang Bangketa, Love Is for the Two of Us, I Love You Honey, From the Bottom of My Heart, Baby Vi, Love Letters, The Wonderful World of Music, The Sensations, The Young Idols, Sweethearts, Sixteen, Leron-Leron Sinta, Edgar Love Vilma, Don’t Ever Say Goodbye, Dama de Noche, Anak ng Aswang, Because You Are Mine, Kampanerang Kuba, Kasalanan Kaya, Karugtong ang Kahapon…” – RV (READ MORE)

“…The following year, Santos made fourteen films, mostly forgettable musicals. It was also a year where her benefactor started to positioned her as more of a film actress than a singing film star. The results was successful experiments that showcased her comedic ability (Ang Kundoktora), screaming action stunts (Takbo Vilma Dali) and dramatic capability (Dama De Noche). Her followers was delighted when she earned her first acting recognition the next year receiving the FAMAS best actress via Dama De Noche. Most of her films in 1972 were directed by Emmanuel Borlaza however, she was able to do one film with Ishmael Bernal, “Inspiration” with the late Jay Ilagan, one of her regular film partner. According to Bernal, the film wasn’t as successful as what he expected, as the film flopped. Aside from Inspiration, Bernal did two other films, El Vibora (starring Vic Vargas and Boots Anson Roa) and Till Death Do Us Part (starring the young Hilda Koronel and Victor Laurel). 1973 turned out to be a banner year for Vilma Santos as she emerged on top with box office hits one film after another. Nine films altogether that featured her in different genres (comedy – “Tsismosang Tindera;” fantasy – “Maria Cinderella,” “Dyesebel at ang Mahiwagang Kabibe” and ”Ophelia at Paris;” action/fantasy – “Wonder Vi,” “Lipad, Darna, Lipad,” and “Darna and the Giants;” horror – “Anak ng Aswang” and teenybopper – “Carinosa” and “Now and Forever”). While Vilma was productive Bernal, like the past two years did only two films, one was the comedy fantasy starring television host and comedian Ariel Ureta in a spin off of Superman, “Zoom, Zoom, Superman!” and “Now and Forever” the film that reunited him with Jay Ilagan and Vilma…” – RV (READ MORE) 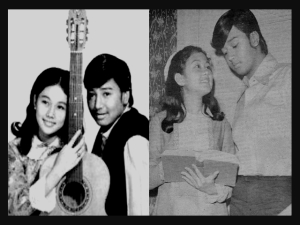