Plot Description: Film-Am Edgar falls in love with Vilma. The two had a set back that ended with Edgar returning all Vilma’s love letters that he regreted and wanted it back. He went to Vilma’s house to retrieve it but was caught and accused of stealing. The whole misunderstanding ended up in court but was settled eventually. Edgar left the country but returned for Alona Alegre’s wedding to Victor Wood. He also reunited Vilma.

An early Vilma Santos-Edgar Mortiz romantic musical also featuring the old gang – Romy Mallari, Esperanza Fabon, Baby de Jesus, Bobby Roldan, Alona Alegre and jukebox king Victor Wood. The story is about young love, with all its anxieties and conclusion. It dramatizes the pains of growing up and the need to follow romantic ideals. An infectious trip down memory lane, with the original D’Sensation gang the way they were! Directed by Abraham Cruz for Tagalong Ilang-Ilang Productions. – Trigon Video

Film Achievement: An Entry to the 1970 Manila Film Festival

Film Review: Love Letters is a musical films specially made for the fans of “teeny-bopper” stars – Vi and Bot. The film was probably shot with improvisations, which means, without a written script. This was noticeably clear as the film’s main characters and the actual names of the actors were not change at all. The film’s main plot was the the stealing of love letters that ended in court, followed by picket line (ala-“Occupy” Wall Street) that was hard to believe. And also the one-after the other testimonies of Edgar, Vilma and both parents that were irritatingly funny. Although we are used to Vilma’s tolereable singing, we’re more surprise to see a singing Alona Alegre! She looked more like Eugene Domingo (clearly before her sexy films/image). One more thing, Alona’s wedding gown was worth a second look, its not like your ordinary wedding gown. The head piece was a beaded hood that covers her hair and neck. With so much singing, Baby De Jesus’s voice stands out among the girls but her piano playing acting was over the top. Victor Wood’s duet with Edgar Mortiz, “Beautiful Dreamers” is worth downloading. Danny Subido was responsible for inserting all the musical numbers that was quite a tasks particularly without a well written musical screenplay. The film was shot in Baguio City and cinematographer, Avelino Peralta’s did a wonderful job showcasing the city on Vilma’s day dreaming except for the akward courtscenes. Love Letters was produced by Tagalog Ilang-Ilang Production and directed by Abraham Cruz, a forgettable film that only a die hard Vi and Bot fans (and those who loves film nostalgia) can only appreciate. – RV, (READ MORE)

“…The filmfest saw the entry of neophyte Lino Brocka into the Philippine movie mainstream with his first directorial assignment under Lea Productions’ Wanted Perfect Mother. It introduced for the first time child sensation Snooky (Serna). Teen superstars Nora Aunor and Vilma Santos have their respective entries: Nora had two entries, Nora in Wonderland (with Manny de Leon) for Tower Productions and Young at Heart (with Tirso Cruz III) for Sampaguita Pictures, while Vilma with his lone entry, Love Letters with Edgar Mortiz for Tagalog Ilang-Ilang Productions. Capping the list were 4 action movies— Tony Ferrer as Tony Falcon, Agent X-44 in Crisis, Zaldy Zshornack and Vic Vargas teamed up in Mga Batong Buhay, Rex Lapid in Shotgun Kid and Jun Aristorenas in Dimasalang; two comedy films, Up, Up and Away with Dolphy and Servillano Zapata with Chiquito, the Jukebox king Eddie Peregrina with his entry Your Love, bombshell Rossana Marquez in Modelong Ginto and Eddie Rodriguez with another dramatic performance in Bakit Pa Ako?…” – Video 48 (READ MORE) 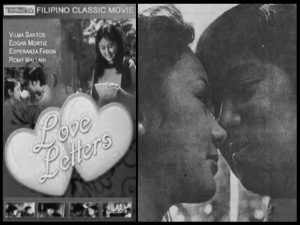