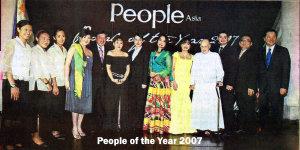 It was a megawatt affair that brought together old friends and new foes, and stars from every firmament.  The annual “People of the Year” awards Thursday night at the InterContinental in Makati City honored the best and the brightest of 2007, and those whose achievements inspired excellence in others.  It was also a gathering of presidentiables and their running mates, with both likely and unlikely tandems being conceived as they rubbed elbows with each other.  Aside from the awardees, also present were former President Joseph Estrada, Vice President Noli de Castro, Sen. Manuel “Mar” Roxas II, Sen. Jinggoy Estrada and Manila Mayor Alfredo Lim.

Former colleagues Estrada and Dolphy embraced, and De Castro kissed Legarda, perhaps the first-time ever that the political foes greeted each other warmly in public.  “I was happy to be there. It was good to see everybody, including Noli,” said Legarda, a two-time Senate topnotcher who lost to De Castro in the 2004 polls. “But my Supreme Court protest stays and speaks for itself.”

Estrada, who is said to be ready to run for president anew in 2010 if the opposition is unable to field a single bet, sought out Fr. James Reuter S.J. and was overheard telling him, “Father, I am a free man now.”The former president spent some years at the Ateneo de Manila.

The evening was also a reunion of sorts for Estrada and “the King of Comedy,” as Dolphy is more popularly known. The two embraced warmly. Dolphy has been wooed in the past to run for public office, and made popular the quote, “Madaling tumakbo, pero paano kung manalo (It is easy to run for office, but what if I win?)”   “Concert King” Martin Nievera, balladeer Christian Bautista, the Angelos and jazz artist Olivia dazzled the A-List audience that filled the ballroom of the InterContinental during the awards program, which was emceed by Johnny Litton and Phoemela Baranda.

The “People of the Year” awards night was co-presented by HSBC, Dockers San Francisco, Nissan Patrol Super Safari, Air 21, Qatar Airways, the Aboitiz Group of Companies, ICTSI and Chaikofi in cooperation with The Philippine STAR and philstar.com.  Except for Gina de Venecia, who was abroad, all the awardees were present to personally accept their glass trophies, bringing together a stellar group under one roof.  People Asia magazine’s “People of the Year” awards cuts across class, gender, age, race and affiliation – a memorable event that celebrates life and honors extraordinary people whose lives make a positive difference in the lives of others. – Joanne Rae Ramirez, Philippine Star on line, 01  13 2008