A Star For All Reasons

Maria Rosa Vilma Tuazon Santos-Recto, more commonly known as Vilma Santos-Recto, or Ate Vi, and now Governor Vi, has made a stellar name for herself both in showbiz and in the political arena. Recognized as one of the original movie queens of Philippine cinema, she rose up to become one of the most versatile actresses in the industry. Throughout a career that spans nearly five decades, she has portrayed many iconic roles – from the heroine Darna, the rebellious Sister Stella L, to AIDS patient Dolzura Cortez – she has given a face to the plight of Filipino women amid the changing moral values of society. She did not only earn the title of “Star for All Seasons” – she has lived it. In fact, she has transcended beyond the “Star for All Seasons” title as she has also proven to be a “Star for all the right reasons.”

Mother of all – Gov. Vi might have shifted her priorities when she entered politics almost 14 years ago, yet she instills the same kind of passion in government service as she does in her acting career. She comes across as a no-nonsense public leader who is determined to serve her people—a job she takes so seriously that, as a consequence, made her sacrifice the showbiz career she had loved dearly. “Acting will always be in my blood,” she said. “But that’s now behind my task as a public servant. My first priority is of course my family. My family is my inspiration,” Gov. Vi told reporters during a press conference for her Nutrition Campaign with Bear Brand. This positive family values that she plainly manifests, combined with the guidance of her senator-husband and her approachable, pleasant personality, win over both her fans and her constituents. She considers the public that she serves as an extension of her family; the nurturing she gives her family is replicated in the larger context of her community. Together with Nestlé Philippines Chief Executive Officer John Miller and Councilor Joseph Juico of Quezon City, Gov. Vi attended the “Laki Sa Gatas Nutrition Education Advocacy,” program held on September 9 at the Bago Bantay Elementary School.

“I believe that health is no. 1,” she told reporters. “That’s why my priority programs are geared toward health. Before, education used to be my top priority, but I soon realized, how can our students learn if they are not healthy? How can they become competitive if they do not get the proper nutrition? “That is why in Batangas, I am initiating programs for the rehabilitation of hospitals, for the promotion of health cards and various nutrition programs,” Gov. Vi explained. For the past several years, the governor has become a staunch supporter of the said campaign that promotes the importance of proper nutrition. The campaign tours schools all over the country encouraging school kids, along with their moms, to drink milk, eat nutritious yet affordable food, and perform well in their studies so they could achieve their goals in life.

Lucky and movie matters – After promoting her advocacy, Gov. Vi then spent time with a very curious entertainment press to get her statement about certain issues. On the possibility of doing a movie with Superstar Nora Aunor, Vilma says she is not closing the doors, but admits that it would be very hard because of their schedules. “She has her own schedule and I have mine,” Gov. Vi explained. She adds that being a public servant has made it her even busier as she now has to attend to the needs of her constituents. “Let’s see, its better yung hindi mo alam na bigla na lang kayong nagkita.” As for her son Luis or “Lucky” who expressed his intent on following her political footsteps, Vilma said she wouldn’t do anything stop him. “Hindi ko naman siya mapipigil, but I told him that being a public servant isn’t easy.” “The first thing I asked him was if he’s ready to sacrifice his talent fee in exchange for a modest salary and he said ‘Yes.’” She added that her being a public servant of Batangas for the past 14 years probably had that effect on her son. “I bring him along whenever there are important occasions, so I guess he has an idea of the job I am doing. If he does decide to pursue politics, I think he has a good foundation already.”

“But if that is really what he wants, then I will be there to support him,” Gov. Vi promised. The beloved governor of Batangas gave the same answer when asked about Luis and Jennylyn Mercado. “When it comes to his lovelife I’ll just be here to support him,” she said adding, “I am here not to meddle or not to impose on anything when it comes to his lovelife.” She then gave her fans something to look forward to, announcing that shooting for her upcoming movie The Healing will begin next month. Joining her in the movie is Kim Chiu and it is said to be a horror movie about Filipinos strong belief in the power of alternative medicine. Whether it is in showbusiness, family or politics, Gov. Vi has proven that she has truly become not just a Woman for all Seasons but simply, a Woman for All. – Ed Uy Manila Times 16 September 2011 (READ MORE) 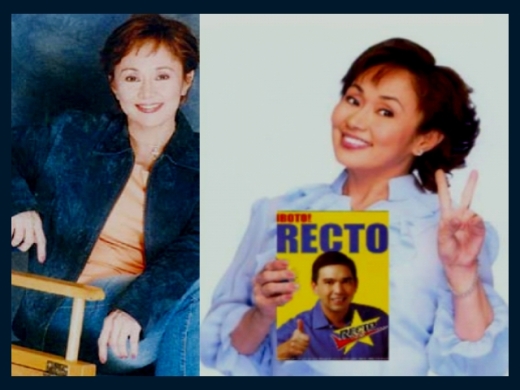 A Star For All Seasons