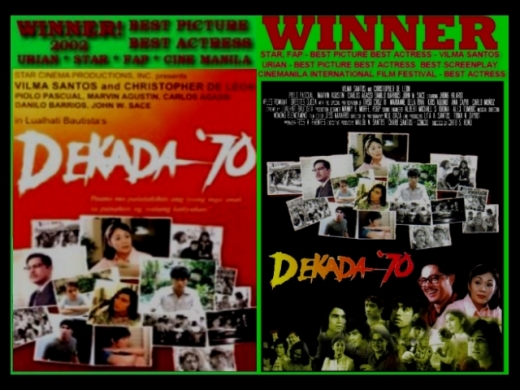 Plot Description: Dekada 70 is a story of a family caught in the midst of a tumultuous time in Philippine history – the martial law years. Amanda (Vilma Santos) and Julian (Christopher Deleon) is a picture of a middle class couple with conservative ideologies, who must deal with raising their children, five boys – Jules (Piolo Pascual), Isagani (Carlos Agassi), Emmanuel (Marvin Agustin), Jason (Danilo Barrios) and Bingo (John Sace) in an era marked by passion, fear, unrest and social chaos. As siblings struggle to accept the differences of their ideologies, as a father faces the painful dissent of his children, a mother’s love will prove to be the most resonant in the unfolding of this family’s tale, will awaken to the needs of her own self, as she embarks on a journey of discovery to realize who she is as a wife, amother, a woman and a Filipino. – Star Cinema