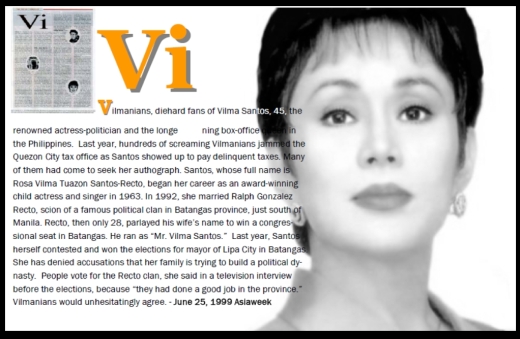 Vilmanians, diehard fans of Vilma Santos, 45, the renowned actress-politician and the longest-reigning box-office queen in the Philippines. Last year, hundreds of screaming Vilmanians jammed the Quezon City tax office as Santos showed up to pay delinquent taxes. Many of them had come to seek her authograph. Santos, whose full name is Rosa Vilma Tuazon Santos-Recto, began her career as an award-winning child actress and singer in 1963. In 1992, she married Ralph Gonzalez Recto, scion of a famous political clan in Batangas province, just south of Manila. Recto, then only 28, parlayed his wife’s name to win a congressional seat in Batangas. He ran as “Mr. Vilma Santos.” Last year, Santos herself contested and won the elections for mayor of Lipa City in Batangas. She has denied accusations that her family is trying to build a political dynasty. People vote for the Recto clan, she said in a television interview before the elections, because “they had done a good job in the province.” Vilmanians would unhesitatingly agree. – June 25, 1999 Asiaweek

Vilma Santos ranked 86th in BizNewsAsia Magazines’ 100 Most Powerful Filipinos – Education: Crash course on local governance, primary health care, human resource development and fiscal administration, UP. The Star for all season has proved cynics wrong that movie people have little between their ears, aside from a beautiful face or a handsome profile. As mayor of burgeoning Lipa, she has been chosen “most outstanding city mayor” in 2000 by the Civil Service Commission. Her popularity helped her husband Ralph Recto win a senate seat in 2001, and she can easily win a senate seat for herself if she gets tired of running Lipa city. The mayor with an ageless face received the Ten Young Achievers award in 1992. – BizNewsAsia Magazine, June 2004

Charito Solis: “Vilma is a better actress than Nora” – OOPS! Keep your cool, dear Noranians, and listen to Charito Solis’ explanation before you accuse her of being, uh, “maka-Vilma.” “Vilma has a wider range as an actress while Nora is limited and typecast in certain roles,” Charito said in a tone devoid of intrigue, answering our question in a straightforward, matter-of-fact manner. “Si Vilma, puede kahit anong role, kahit bold. You can’t imagine Nora doing a bold role, can you?” But, and that’s the big but, “Nora has more depth than Vilma,” Charito added, “and it’s because of her expressive eyes. Nora is very effective in scenes where she doesn’t say anything, just act with her eyes, at ‘yan ang kulang ni Vilma. Vilma has to say something to be effective.” Charito has worked with Vilma twice (in “Mga Tigre ng SierraCruz” and “Modelong Tanso”) and with Nora once (“Minsan May Isang Ina”). Speaking in general now, said Charito, “Vilma is the better actress.” We asked Charito that ticklish question during the lunch presscon for her latest movie, the star-studded Mother’s Day offering of Regal Films titled “Dear Mama”, which also stars Gloria Romero, Laurice Guillen, Snooky, Janice de Belen, Julie Vega, Manilyn Reynes, Jaypee de Guzman, Rey “PJ” Abellana and Alicia Alonzo in the title role. Our own personal opinion somehow jibes with that of Charito whose “throne”, I suppose, will be inherited by Vilma (while Nora will inherit the “throne” of the other drama queen, Lolita Rodriguez). – Funfare by Ricardo F. Lo, The Phil. Star – 03 April 1984

Vilma is the first Filipino actress to be featured in Time Magaziine. – The Philippines: Let Them See Films. When politics became pretty much a one-man show in the Philippines, the people lost a prime source of entetainment. Part of the gap has been filled by a burhome-grown film industry, which displayed nine of its new productions at the Manila Film Festival last month. Some 2 million moviegoers saw the films. Some of the movies were historical dramas pointing up the search for a Filipino identity during the long years of Spanish rule. But the most acclaimed were contemporary stories with a heavy populist touch. The festival’s smash hit was Burlesk Queen, starring Filipino Superstar Vilma Santos. It tells the syrupy tale of a poor girl who turns to burlesque dancing to support a crippled father. She falls in love with the son of a politician, elopes with him, and then tragically loses him back to his possessive mother. The treacle is supplemented with some gritty argument about the rights and wrongs of burlesque, with a lefthanded dig at censors. Huffs the burlesque impresario at one point: “Who are they to dictate what the people should see?” – Time Magazine Feb. 13, 1978 Vol. 111 No. 7 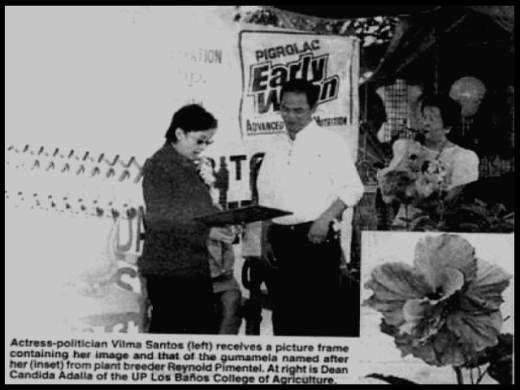 Actress-politician Vilma Santos Recto receives a picture frame containing her image and that of the gumamela named after her, Hibiscus-Rosasinensis, from plant breeder Reynold Pimentel. 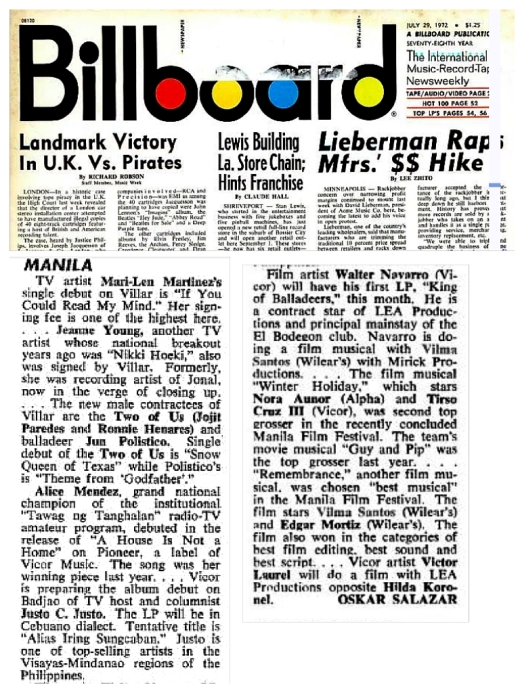 Manila – TV artist Mari-Len Martinez’ single debut on Villar is “If You Could Read My Mind.” her signing fee is one fo the highest here….Jean Young, another TV artist whose national breakout years ago was “Nikki Hoeki,” also was signed by Villar. Formerly, she was recording artist of Jonal, now in the verge of closing up…The new male contractees of Villar are the Two of Us (Jojit Paredes and Ronnie Henares) and balladeer Jun Polistico. Single debut of the Two of Us is “Snow Queen of Texas” while Polistico’s is “Theme from “Godfather.” Alice Mendez, grand national champion of the institurional “Tawag ng Tanghalan” radio-TV amateur program, debuted in the release of a “A House is Not a Home” on Pioneer, a label of Vicor Music. The song was her winning piece last year…Vicor is preparing the album debut on Badjaoof TV host and columnist Justo C. Justo. The LP will be in the Visayas-Mindanao region of the Philippines. Film artist Walter Navarro (Vicor) will have his first LP, “King of Balladeer,” this month. He is a contract star of Lea Productions and principal mainstay of the El Bodegon Club. Navarro is doing a film musical with Vilma Santos (Wilear’s) with Mirick Productions…the film musical “Winter Holiday,” which stars Nora Aunor (Alpha) and Tirso Cruz III (Vicor) was second top grosser in the recently concluded Manila Film Festival. The team’s movie musical “Guy and Pip” was the top grosser last year…”Remembrance,” another film musical, was chosen “best musical” in the Manila Film Festival. The film stars Vilma Santos (Wilear’) and Edgar Mortiz (Wilear’s). The film also won in the categories of best film editing, best sound and best script…Vicor artist Victor Laurel will do a film with Lea Productions opposite Hilda Koronel. – Oskar Salazar, Billboard July 29 1972