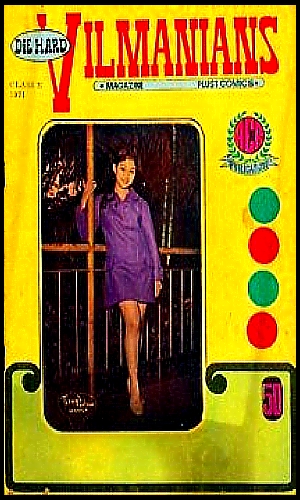 Die Hard Vilmanians Magazine is an entertainment comics magazine published by ACR Publications. Its maiden issue came out in 1971 with Angel C. Reyes as Managing Editor and Phil. Ver. Posadas as Editor. The title of the magazine was named after Vilma Santos’ die hard fans or followers. – Komiklopedia (READ MORE).

“…True enough, they were most enthusiastic but kind of controlled with their adulation when Ate Vi came with her Girl Friday Aida Fandialan in tow. Anyway, when the famed actress had the chance to talk with her adoring fans, she was most nostalgic as she went down memory lane of her memorable encounters with them. According to her, she had this fan who would come almost on a daily basis at her governor’s office in Batangas and never complained even if Ate Vi could not attend to her or keep her entertained. The actress-politician also cited this aging fan who’d carry blown-up photos of the Star for All Season with all the dedication in the world during her VIP days, content to see her idol perform. She also expressed being truly touched by the filial devotion of this fan who was with her almost from the very beginning of her illustrious showbiz career and was just staying with her family in a modest rented apartment in La Loma. The mere fact that he got along famously with her late dad was something that Ate Vi would always remember with fondness. “And I’m glad that he’s still with me today!” she says apparently overwhelmed by a myriad of emotions. Ate Vi also remembered a fan who was already in her early 80s and yet she never failed to come whenever she asked her to. At this point, Ate Vi also singled out a fan who has remained unattached and never gotten married, but has religiously brought her kakanins from Biñan, Laguna. Indeed, the Star for All Seasons is obviously equipped with an elephantine memory who never forgets any good deed done or kindness she’s been most generously showered with…” – Peter Ledesma (READ MORE)

Becoming Gloria Romero “Vilma Santos’ loyal fans were so happy about her latest acting award at the Urian awards (for her performance in “Dekada ’70”) that they turned out in full force at her “reunion” celebration at Bakahan at Manukan on P Guevarra st. in San Juan. Movie scribes with a soft spot in their hearts for Vi also showed up, making the evening a riotous success. In the midst fo all the fun and frolic, Vilma was able to sit with us for a spell, and breathlessly brought us up to date on what’s been happening to her these past months, as well as gave us a peek into her future prospects. First off, she’s appreciative of the trophies that she’s gotten for her intense but controlled performance in “Dekada ’70,” for which she swept the competition…In the past, she used to think of retiring from the big and small screens, to concentrate on public service and urban management. Now, however, she’s sure that she’ll continue to act “until I become a gransmother – Gloria Romero.” This is a welcome development on the local film scene, which is notorious for its fetish for youth, and its bias against age and experience. With Gloria and now Vilma showing the way, our moviegoers can be educated to value veteran talents over callow starlets, so performances on the big screen can mature and deepenn through time. The future? Vilma wants to make one film a yar, and is looking for challenging plots and characters. In politics, Vilma debunks rumors that she’s going to run for senator next year. In fact, she refuses to think of politics at all, preferring instead to concentrate on her work as mayor of Lipa City. But, if voters there want her to run for another term, Our sense is that they won’t have a hard time persuading her…” – Nestor U. Torre, Philippine Daily Inquirer, May 31, 2003 (READ MORE) 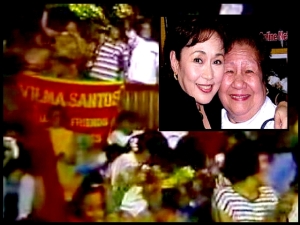