Originally released in 1961, Karugtong ng Kahapon was re-used as the title of the Vilma Santos 1975 film. Literally translated as the “continuation of yesterday,” the original film casted the major stars of this period, Rita Gomez, Mario Montenegro, Marlene Dauden and even its director, Eddie Garcia will all have films with Vilma. It was written by Clodualdo Del Mundo for Tagalog Klasiks, a comics magazine. Meanwhile, the 1975 film starring Vilma Santos was also written for comics magazine by Nerissa Cabral and Eddie Garcia was also involved, this time not the director but part of the ensemble cast that includes major stars like Gloria Romero and Celia Rodriguez.

The Director – “…The same breadth and variety in his performances characterize Eddie Garcia’s other career in the movies as a director. Either acting or directing, he seems to have the same temper and outlook; one characterized by a nearly total lack of self-consciousness and self-absorption. But the artistry and innovation are unmistakable. It would appear in fact that Eddie Garcia used acting as a vehicle in order to become a filmmaker. He told the Manunuri that when he joined the movies in 1949, he made a promise to himself, “In 15 years, I will be director.” He made it as director in just 12 years when he was given an assignment in 1961 by “Doc” Jose Perez, studio boss of Sampaguita, the dramatic movie, “Karugtong ng Kahapon,” starring Rita Gomez, Ric Rodrigo and Marlene Dauden. Before that, he was assistant director to Mai’ Torrres, Octavio Silos and other Sampaguita directors…” – Lito Zulueta (READ MORE)

“…The 1961 movie, “Karugtong ng Kahapon” is almost forgotten. Even Eddie Garcia, in most of his interviews never mention or cite this movie which played a big part in his illustrious career. This is Eddie’s first directorial assignment, and not “Historia de un Amor” (1963) as previously reported in other articles. Eddie is a Famas Hall of Fame awardee for Best Director, Best Actor and Best Supporting Actor. What a feat!…” – Simon Santos (READ MORE) 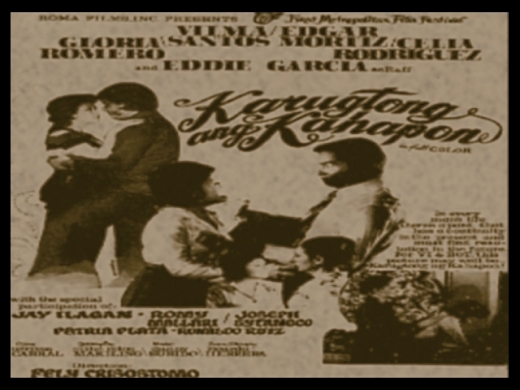 Festival Entry – “…Nora Aunor’s entry, NV Productions’ Batu-Bato sa Langit (directed by Luciano B. Carlos), was a hit and won as 3rd Best Picture. Vilma Santos, on the other hand, gave a notable performance in Roma Films’ Karugtong ang Kahapon. That time, Nora and Vilma were in their peak, their career and the movies they made were being followed closely, compared, watched, praised, scrutinized both by fans and critics. Their storied and fierce rivalry dominated our movie industry for years. In fact, one could argue that even to this day, a Filipino movie fan is either a Noranian or a Vilmanian…” – Wikipedia (READ MORE)

“…Starring Vilma, daughter of a “happy” couple Eddie Garcia and Gloria Romero. Throw in the other woman of Eddie, Celia Rodriguez and as expected, another morality play was born. Shown at the first Metro Manila Film Festival…” – Mario O. Garces (READ MORE)