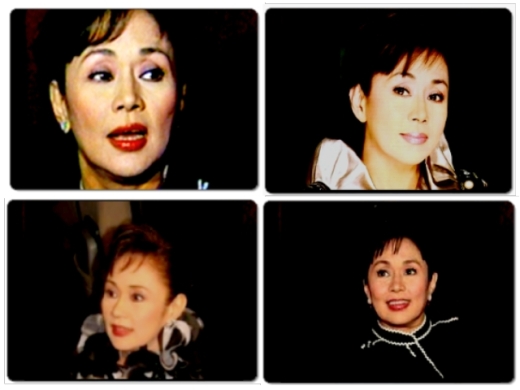 “Vilma Santos, cited for achievement in acting, could not make it to the awards-giving rites due to other commitments that had to do with her “real-life” role as mayor of Lipa City. She requested instead Boots Anson-Roa of the Mowelfund, who also sat on the Advisory Committee of The “F Festival,” to read her response for her. Here’s what Vilma had to say: “I wish I could personally accept this award, but I have to honor my commitment to my constituents which I can’t turn my back on or delegate to my staff. Nevertheless, I would like to convey my deepest gratitude to the organizers of the Feminist Centennial Filmfest for honoring me with this award. And I would like to share this award with those women who dare transport to screen characters, stories and issues about women. Our movie producers like Ms Lily Monteverde who daringly produced the movie, “Sister Stella L”; Ms Charo Santos-Concio who chose me to portray the role of a mother in “Dekada ’70,” “Bata, Bata, Paano Ka Ginawa?” and “Anak”; the scriptwriter of these movies, Ms Lualhati Bautista; director Laurice Guillen who directed the movie, “Dahil Mahal Kita”; Marilou Diaz-Abaya, too; and other female directors and co-workers in the film industry. Through their works, they brought to public attention a wide array and range of problems confronting women, how they courageously, daringly and intelligently cope with and face them, thus, raising the consciousness of our women, helping them gain a deeper understanding of their life and situation and acquire, to borrow the phrase of a film critic, the ability to control their lives and make choices of their own. Who else could best empower our women except our women themselves? May our women therefore continue to play a more active role in advancing the cause of women and in building a better quality of life for our countrymen! Maraming salamat po muli. At mabuhay ang ating kababaihan!” – Rina Jimenez-David, Inquirer, Dec 09 2005 (READ MORE)

Once again, the wind wafts yet another welcome scent of victory for the Philippines Movie Queen and Star for all Seasons at the Feminist Centennial Festival at the Cineplex, Shangri-La Plaza last night. She is indeed a national treasure. We belong to thousands of Filipinos who wish for her to be the next National Artist of the land. Lately, we hear that it will be a choice between her and the late FPJ. For sure, the numerous or countless recognitions, honorary doctorates, lifetime achievements and this latest honor given by the NGO-GO Feminist Centennial Media Committee and the Communication Foundation for Asia cemented Ate Vi’s stronger bid to clench the National Artist title. And if this happens, yan ang talagang “heaven!” The awards night was by invitation only.

Against our better sense, we tried our luck and waited on cue. There is reason to be optimistic. Our beloved Ate Vi is one of the 6 distinguished honorees. Having prior commitments with her constituents in Lipa, we believe that there must be a representation in her behalf. And our patience paid off. We were accommodated by the working committee at the reception. We proudly introduced ourselves as member of Vision and VSSI (Vilma Santos Solid International). Present to witness the ceremony include Eric, Noel, Al, Zaldy, Paulo and myself. We were a small contingent occupying a better section of the theater against the batallion of diehard Noranians, how did this happened?! Ms. Boots Anson Roa accepted the trophy (in her her behalf) and read the passionate and meaningful thank you message of Ate Vi. some insights. I am posting some of the write-ups included in the festival programme: 6 reasons to celebrate we salute six icons of Philippine cinema…for their invaluable contributions to the film industry…for being legendary…and passionate about their art… and for being women.

Marilou Diaz-Abaya, director. Despite the risks of being categorized as a “woman’s director,” Marilou Diaz-Abaya staked her claim on the genre with the trilogy of films – Moral, Brutal and Karnal – that explored the realities of women’s lives and challenged social mores and rigid expectations of women. In the decade of political turmoil and rapid social change, Diaz-Abaya’s films, while anchored in intensely personal stories, enlarged upon the intimate limits of women’s lives to raise sharp and cutting questions about Philippine society and gender relations, thereby triggering debate, discourse, and ultimately, the transformation of the Filipina’s sense of self and her situation. Lualhati Bautista, screenwriter. Known for creating strong, independent women characters asserting their autonomy and engagement in the society, Lualhati Bautista has given today’s women compelling role models to provide alternative modes of behavior, attitudes, and relations. At the same time, she uses the women’s stories as prisms on the political and social condition illuminating and reflecting women’s realities and aspirations in all their vivid color and artist to make films that combine artistry and innovation with commercial viability and social commentary. Through Star Cinema, Santos-Consio has shown that it is possible to meet the demands of commercial cinema without compromising one’s commitment to quality and to delivering meaningful and compelling stories. Lily Yu-Monteverde, producer. Has been “mother” to the Philippine movie industry in so many ways.

Through the last four decades, she has produced more than 200 movies, some of them born of her own stories, most shaped by her sensibilities ans instincts for what the market wants and demands. Even as the Philippine movie industry struggles out of the doldrums, “Mother” Lily continues to make movies simply because, as she declared at the recent ceremony, she “loves the movies.” Even as she kept Regal Films profitable with commercial offerings that covered almost all genres, “Mother” Lily also paid back her debt to the Philippine cinema by financing and allowing the country’s foremost film artists to create works that today endure as some of the best Filipino movies ever made. Nora Aunor, actor. Though “icon” is today a much-overused word, to call Nora Aunor an “icon” of Philippine movies would not be an overstatement. From her beginning as a singer and pop idol, Nora tapped unexpected reserves of experience and sensitivity to transform herself into an excellent actor, in the process acquiring a body of work that includes some of the finest movies of “Golden Age” of local cinema in the 1970’s and 1980’s, particularly Himala, Tatlong Taong Walang Diyos, Ina Ka ng Anak Mo, and Bona. Vilma Santos, actor. From the moment she allowed herself to break out of her “teen-idol” persona in Burlesk Queen, there was no stopping Vilma Santos in her search for artistic maturity and challenge. In the process, she has dared take on roles that could have potentially marred her image but instead provided her depth and complexity as an artist while strengthening her appeal at the box office. The designer-sculptor’s words. According to Julie Lluch: “the feminist struggle is not so much about equality as it is about the power and freedom to be truly woman and truly human. Being a woman is to know herself as diffrent and separate, beautiful and free. As she taps the wellspring of the spirit within, she is ready to leap and soar to a fully creative life – a life she share’s with man, with whom she builds the kind of world they both want for themselves and their children.”

At the conclusion of the program, seriously or half in jest, we shook hands and congratulated Ms. Charo Santos-Consio and Director Marilou Diaz-Abaya. We proudly introduced ourselves and averred that the occassion would have been more meaningful and significant had Ate Vi made it to the event and personally accepted her trophy. We told Director Marilou that we are only a small representation of the Vilmanians. We were thrilled and happy when she raised her hand and told us “count me in!” She asked us to extend her regards to Ate Vi and that she truly misses her. Congratulations to all the distinguished honorees most especially to our beloved Ate Vi! Mabuhay po kayo and God bless. To the men and women behind the Feminist Centennial Festival and other affiliations and cooperating groups, our heartfelt gratitude and Mabuhay po kayong lahat! – June Sison, V Magazine, Issue No 5 (READ MORE)