In the 1980’s, Nora Aunor’s Superstar show was losing viewership and her box-office appeal was also in question. Suddenly, the 70’s superstar was being eclipsed by a non-singer but an excellent dancer and versatile actress Vilma Santos. She has just scored her first of four grand slams for the movie Relasyon and continued to reign as the Longest Box-office Queen of Philippine Cinema. And slowly but surely, her VIP (Vilma In Person) TV show was gaining patronage/high ratings too from the precious class ABC households nationwide, TV advertisers’ prime target audience for their products.

Smart Move – There was no stopping Vilma Santos. She was about to conquer the TV musical-variety genre where Nora Aunor ruled for years. Early on, Vilma Santos had rough sailings with her musical variety show. VIP was being broadcast from Channel 2, which had a bad reception among TV homes nationwide, and was no match to the more modern RPN Channel 9 where Nora’s Superstar show was simultaneously shown from Luzon to Mindanao in vivid, crisp color. When VIP moved to GMA Channel 7, it was the best move that Vilma’s think tank ever did. With better satellites, shrewd marketing, state of the art facilities, and more ambitious production numbers and with the Dancing Queen Vilma at the center of it all, and with the genius of Maribeth Bichara’s choreography and musical concepts written all over the show – “Vilma!” became the most watched and the most awarded TV show in the musical/variety category.

52 – Every Friday, 52 weeks a year, there was Vilma Santos’ most awaited opening number that never failed to surprised, amused and elicited ooohhhs and aaahhhs as the TV Musical Variety Queen won the hearts of music and dance aficionados here and abroad. Who would ever forget these outstanding, well-rehearsed, high performance level and unforgettable numbers?: Madonna — The Madonna Material Girl number, which would make Madonna proud. She sashays, gyrates, and pirouettes ala Tina Turner for Vilma’s version of Private Dancer.? (“I’m your private dancer, a dancer for money, do what you want me to do?” Talbog ang Burlesk Queen! My most memorable Maribeth B. and Vilma Santos sexy number was when they showed their legs and swing those hips as the Swing Out Sisters belt out their number one hit Breakout…The “A Chorus Line” ensemble, “On Broadway” with Queen Vilma leading the group with a hat, gloves, a cane and a glossy costume. Who would ever forget her swing number with then sweetheart Ralph Recto? Or a dance number with the late Nida Blanca? Or a naughty, haughty dance number La Conga, sung by Gloria Stefan? And many, many more production numbers that were shot from Luzon to Mindanao, and even in the U.S., like The Raging Waters in California.

Imitated – Vilma! was imitated but never equaled by the fly by night copycats: Snooky Serna, Maricel Soriano, even Alma Moreno in Love-liness. Sharon stuck to singing and wers-wers English. At one time, Nora Aunor was guest. Pinaluhod lahat sila ni Ms. Vilma Santos! Whenever a Regal or a Viva movie promo was in progress, they all trooped to the ratings winner Vilma! From GMA studio, to the Metropolitan Theater, Vilma! made history. From the cha-cha, the boogie, to tinikling to meringue and the swing – Vilma did them all. She was everybody’s Ate Vi or Tita Vi. The TV Queen. The Dancing Queen, and how! Here are some of the awards the Queen Star and her famous Vilma! show had won: 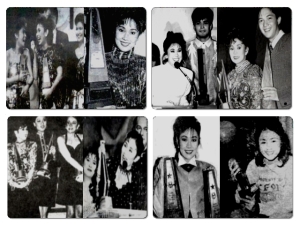 My wish: Please bring back Vilma!, the dancer and entertainer par excellence, even if it’s just one show. Sayaw, Vilma, sayaw! The whole world awaits. Who cares if you’re 51? Tina Tuner is almost 70. Vilma, you are the Eternal Youth and the Dancing Queen Forever! – Mar Garces, V magazine, 2005 Global Vilmanians