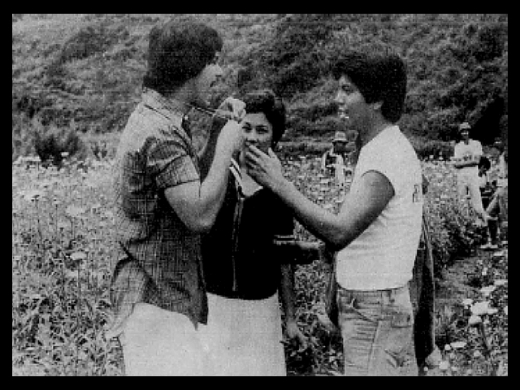 “…PX, short for Paula Xavier (Vilma Santos) was an illegal alien in New York City. She’s broke and waiting for fiancé, Cocoy laurel to fulfill his promise of marriage despite the fact that Cocoy has already married an American to secure a green card. Hiding from the authorities, PX met two men who are willing to take care of her but conflicts arise as the two wanted to maintain a serious relationship with her. Played wonderfully by Christopher Deleon and Bembol Roco, the film resolved the love quadrangle between ex-fiancé, Cocoy Laurel and the two brothers when the jealous Cocoy reported Vilma to the immigration authorities. PX was deported back to the Philippines. But the films didn’t end in a sour note, PX found herself reunited with Christopher Deleon when the later followed her in the Philippines…” – RV (READ MORE)

“…Pinay, American Style (1979) carries such attributes. Shot entirely in America, it depicts the plight of some Filipinos living there – Filipinos who are obsessed with amassing fortunres and landing high-paying jobs and enjoying the dolce vita in the muchballyhooed “land of the brave and home of the free” and the “land of the mighty dollar.” Compared to foreign movies with explicit sex scenes, Pinay… would not even deserve the “For Adults Only” tag or an “X-rated” classification, according to Elwood. Basically, the movie is a relfection of the typical plight of Filipinos living abroad. It is a plight that runs counter to the optimism and false hopes entertained by potential Filipino immigrants. Arriving in the U.S. as tourists, some Filipinos would choose to stay behind in their search for “greener pastures.” Having done so, they have to play hide-and-seek with immigration authorities, accept odd jobs to survive in the asphalt jungle, get married to ward off deportation, and similar evasive maneuvers. These same incidents are what the cast – Vilma Santos, Christopher de Leon, Bembol Roco and Victor “Cocoy” Laurel – portray in Pinay. Pinay is Elwood’s second movie shot abroad after Lollipops…” – Manny B. Fernandez, Expressweek, July 12, 1979 (READ MORE)