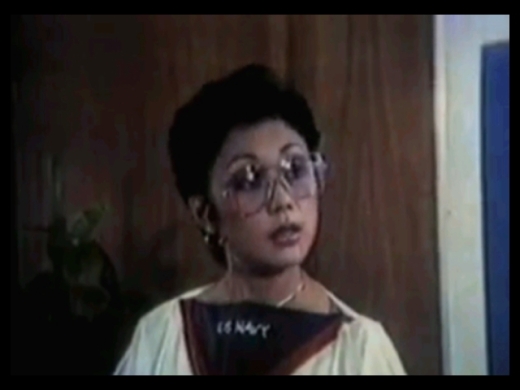 “…But the biggest fear of Borlaza was when Agrix Films’ Kampus? (1978) was booked one week after the opening of VS Films’ Pagputi ng Uwak, Pagitim ng Tagak. The Celso Ad. Castillo film was an artistic triumph, and Borlza felt following it up with another Vilma-Bembol starrer would put them at a great disadvantage. The Vilma-Bembol fans might still be raving over Pagputi… instead of discussing Kamput? As it turned out, people let Pagputi…pass and waited for Kampus? judging from the comparative gate receiots of the two movies…Sabi ni Mama Santos, ako daw ang “pumatay” sa kanilang Pagputi…eto ang parusa ko, bigyan ko daw sila ng isang Kampus? so I’m making for them Coed. You see, when I was working on Kampus? at UP Los Banos, I realized their problems and lifestyle can be a source of even 10 movie materials. At kapag ang student force pala ang nag-patronize sa Tagalog movie, ang laki ng audience!” Borlaza revealed…I’m very meticulous about is: the audience were to identify itself with my main character, will it be happy with the poetic justice I execute? Will they find it correct and realistic? In Kampus? for instance, students who were pleased with the movie told me they liked the ending very much. They agreed with it. Vilma was bedded first by Mat Ranillo III, but ended up with Bembol who was the right choice after all. They say in real life, the man you walk down the aisle with is not necessarily the first man you had sex with. Also they say the dialouges were very in – like the way actual students would speak them. Siguro, once they sit in the theater, they are not bothered by such questions as ‘Why” or “how come?” Is the star value the main thing in selling movies? “In the case of Kampus?, yes, because Vilma Santos was my main star and she’s the current box office queen …” – Manny B. Fernandez, Expressweek, November 9, 1978 (READ MORE)