The Flower – “…Dama de Noche (Cestrum nocturnum), literally translates “lady of the night” is famous for its unusual biorhythm which made it the subject of legend. Its flowers bloom at night and exude a very sweet scent. Although widely cultivated in the Philippines, the plant was introduced from tropical America….” – Wikipilipinas

The LegendThe Legend of Dama de Noche – “A thousand years ago, there was a rich maharlika, or nobleman, who spent his early bachelor days recklessly, wining and dining in the company of nobility. He drank the finest wines, ate the most delectable food and enjoyed the company of the loveliest, perfumed and bejewelled women of the noble class. After years of this kind of life, the maharlika finally felt it was time to settle down and marry the woman of his choice. “But who is the woman to choose?” he asked himself as he sat in the rich splendour of his home, “All the women I know are beautiful and charming, but I am tired of the glitter of their jewels and the richness of their clothes!” He wanted a woman different from all the women he saw day and night, and found this in a simple village lass. She was charming in her own unaffected ways, and her name was Dama. They married and lived contentedly. She loved him and took care of him. She pampered him with the most delicious dishes, and kept his home and his clothes in order. But soon, the newness wore off for the maharlika. He started to long for the company of his friends. He took a good look at his wife and thought, she is not beautiful and she does not have the air of nobility abouther, she does not talk with wisdom. And so the maharlika returned to his own world of glitter and splendor. He spent his evenings sitting around with his friends in their noble homes , drank and talked till the first rays of the sun peeped from the iron grills of their ornate windows. Poor Dama felt that she was losing her husband. She wept in the silence of their bedroom. “I cannot give my husband anything but the delights of my kitchen and the warmth of my bed. He is tired of me.” She looked to the heavens. “Oh, friendly spirits! Help me. Give me a magic charm. Just one little magic charm to make my husband come home again, that he will never want to leave my side, forever!”

It was midnight when the maharlika came home. He opened the door of their bedroom and called for Dama to tell her to prepare his nightclothes. “Dama! Dama, where are you?” he called. He shouted all around the bedroom. He sarched the whole house. Still the nobleman could not find his simple wife. Finally the nobleman returned to their bedroom, tired and cross. But, as he opened the door, he stopped. A are scent, sweet and fragrant, drifted to him. It was a scent he had never smelled before. He entered the room and crossed to the window where the scent seemed to be floating from. A strange bush was growing outside the window. Some of its thin branches had aleady reached the iron grills and were twisting around. And all over the bush were thousands of tiny starlike, white flowers, from which burst forth a heavenly, enchanting scent! He stood there, completely enraptured by the glorious smell. “Dama…” he whispered softly, onderingly, could this be Dama? The rich maharlika sat by the window, and waited for the return of his loving simple wife. But she did not come back. She never returned to him again. Only the fragrance of the flowers stayed with him, casting a spell over his whole being. In the moonlight, Dama of the night, or Dama de Noche would be in full bloom, capturing the rich maharlika, making him never want to leave her side, forever. 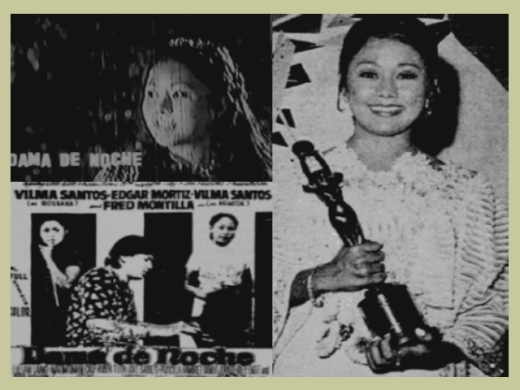 “…Dama de Noche is showing in three theaters— Remar, Delta and Sampaguita. It is, Vilma was quoted as saying, her dream role fulfilled. The very professional Vilma has come out with the resolution than henceforth she will demand to see the script and also see that the script is demanding- or she’ll say nix. Well, Dama de Noche is exactly just that: demanding. In it she delineates the twin-sister roles of sweet Armida and deranged Rosanna. Vilma sobs and screams, giggles, and crazy-dances, claws and clowns, sobs again and screams some more. But she does more than all these things. She acts. In the Filipino movieworld where crying is synonymous with acting, that certainly is being ahead of one’s kind. Vilma as Armida is drab and dry, almost a movie prop. It is in the portrayal of Rosanna that Vilma would tear one’s heart away. The many close-ups so effectively used throughout the movie show the unglamorous Vilma: her frowns, her lip-twitching, her uninhibited and stifled sobs. But Vilma is less successful with the shifty look that is the distinctive trait of the deranged. She compensates for this in the ‘betrayal’ scene when Rosanna suspects that Leo, Armida and the psychiatrist (Fred Montilla) all conspired to imprison her in the hospital. Another outstanding feat is the subdued scene where Rosanna learns that Leo has gone to the Lerma villa to meet Armida. The vivacious Rosanna is just as winsomely pathetic. Watching her is just like seeing a bosom friend trying to pretend she’s happy when both of you know she’s not only in this case, Rosanna is truly happy. Her non-knowledge of her plight is what is particularly heart-curling. Dama de Noche is Tagalog Ilang-Ilang Production’s entry in the QC filmfest which started on Oct.15. It is a very simple story, almost run-of-the-mill, but Nestor Torre, Jr. who wrote the screenplay saved it with his meaningful and amusing lines. However, the movie is occasionally dragging with the Filipino moviemania for spoonfed sequences…” – Times Jornal, October 24, 1972 (READ MORE)

The 1998 Film – A woman (Ynez Veneracion) who was maltreated during her younger years (Aiza Marquez played the young role) gets revenge on the people who abused her. This 1998 film was directed by Lore Reyes and featured Ynez Veneracion, Mark Gil and Lara Fabregas. Released on July 22, 1998 by Neo Films and Viva Films, both lead star Mark Gil and Ynez Veneracion will co-starred with Vilma Santos (the first Dama de Noche lead star) in 2012 via horror film, The Healing.