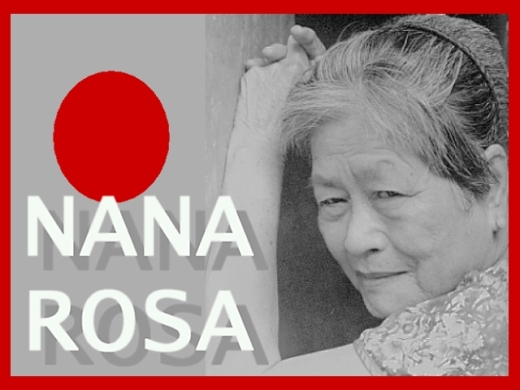 Nana Rosa – “…After Rizal and Muro-Ami, I thought you were going to do Larawan (Nick Joaquin’s Portrait of the Artist as Filipino). What happened? “Well, the negotiations (for Larawan) fell through even before the showing of Muro-Ami. After doing Muro-Ami, I thought I was going to die of exhaustion. I was suffering from hypothermia (a condition of abnormally low body temperature); I was pasmado because of all the diving I did during the filming of Muro-Ami (in Bohol). I wanted to go on a sabbatical. Malou (Santos, Star Cinema managing director) asked me what I liked to do for Star Cinema but I begged off because I didnt feel na kaya ko mag-trabaho in the next two years. What happened was that, naka-sabbatical nga ako, kaya lang sa giyera.” What about the Nana Rosa (the Comfort Woman) project (also for Star Cinema, which would have starred Vilma Santos in the title role)? “I still like the Nana Rosa project, Im still interested in it, but that might have to come later…” – The Philippine Star, December 09, 2001 (READ MORE)

Comfort Women Slam Japan Apology – “…The Philippine President and Senate leaders hailed Japan’s apology for its actions during World War Two on Tuesday, but Filipinas who were used by Japanese soldiers as sex slaves called it an empty gesture. Senate President Eduardo Angara and Francisco Tatad, head of the Senate foreign relations committee, backed demands for compensation by Filipina “comfort women” who were used by Japanese soldiers as sex slaves in battlefield brothels. About 20 Filipina comfort women held a protest outside the Japanese embassy in Manila said they were not satisfied with Murayama’s apology. The group is demanding $200,000 compensation for each victim. “I’m angry. If he wants to ask for forgiveness but refuses to compensate us, then that’s nothing to us,” said Maria Rosa Luna Henson, spokeswoman for the comfort women. Nelia Sancho, leader of the Lila Filipina women’s group backing the women, estimated up to 20,000 Filipinas were used by Japanese troops as sex slaves during the war, but only 30 percent survived the war. Sancho hopes that the Japanese government will reconsider its position of not providing legal compensation, particularly to the comfort women…” – Reuter (READ MORE)

Rescued by Huk Guerrillas – “…Her ordeal began when she was raped by Japanese soldiers while gathering firewood in what is now Fort Bonifacio. Fearful for her safety, her mother brought her to a village in Pampanga, where Lola Rosa joined the Hukbalahap guerrillas, gathering food and medicine for them, and acting as a courier for messages. While transporting a cartload of guns, she was stopped by a Japanese sentry who forcibly took her to a hospital in Angeles City which had been turned into a garrison. There, at the age of 14, her life as a comfort woman began. For nine months until her rescue by Huk guerrillas, scores of Japanese soldiers raped her everyday. Lola Rosa told no one but her mother of what had been done to her. Not even the man she later married knew; her children found out only after she had come out into the open in 1992. Abandoned by her husband, she raised three children on her own, working as a laundrywoman, and later as a sweeper in a cigarette factory. She did not go mad only through faith and the sheer effort of will, she said. She also vowed to remember. To her dying day, Lola Rosa had a prodigious memory for dates and events. She once said that for her, remembering was the best revenge….” – Philippine Center for Investigative Journalism (READ MORE)

Maria Rosa Luna Henson or “Lola Rosa” (Grandma Rosa) (1927- 1997) was the first Filipina to tell the world of her story as a comfort woman for the Imperial Japanese Army during World War II. In 1992, when Henson was 65, she decided it was time to tell the world about her experience during the Japanese occupation of the Philippines in World War II. Until 1992, only two people had known of her secret, her late mother and her dead husband. After coming out publicly with her story, Lola Rosa decided to write about her war-time experience. The result was the book, Comfort Woman: A Slave of Destiny. In Comfort Woman: A Slave of Destiny, Lola Rosa provided an achingly straightforward voice to the erstwhile silent and invisible existence of Filipino comfort women. Almost 200 Filipino women soon followed Rosa’s example as they decided to reveal themselves and their personal stories for the first time—not only to the world, but to their families as well. Other victims, including those from Korea and China, joined the Filipino women to file a class action lawsuit against the Japanese government. Together, they demanded justice in the form of a formal apology from the Japanese government; the inclusion of all the war-time atrocities committed by the Japanese into Japan’s school history books; and monetary reparations to compensate for all the abuses and violence committed against the women. However, the Japanese government denied legal responsibility and refused to pay the victims. Later, responding to the growing pressure of continued protests and appeals by the survivors and their supporters, Japan finally set up the Asian Women’s Fund (AWF) in 1995 to collect money from private Japanese citizens, and offered them to the victims as “atonement payments.” Henson died of a heart attack in 1997, a year after her autobiography was published, and after she decided to accept the money from the AWF. – Wikipedia (READ MORE)