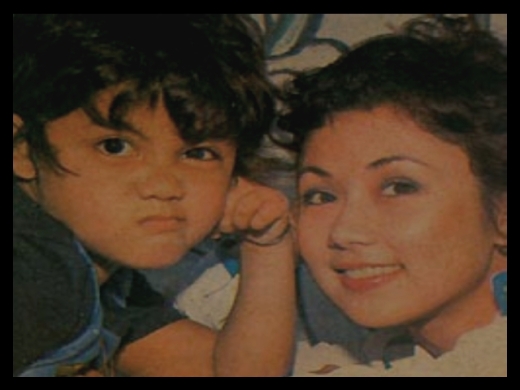 Darna at Ding starring Vilma Santos Niño Muhlach was shown in 1980. This is Vilma Santos 4th and last Darna movie. Vilma was in good company with the child superstar Nino Muhlach as her brother sidekick “Ding.” The super team zoomed in out of the screen with bravura. Humor is mixed with fantasy, magic and the duo’s thrilling encounter with ingenious villains who wants to rule the world adds excitement to this last Vilmas Darna. Among their wicked adversaries was Marissa Delgado as the evil German scientist who summons cadavers from their graves to carry out her grisly plans. An impressive roster of big name stars in cameo roles completed the cast. The movie also stars Celia Rodriguez as Lei Ming the evil witch, Veronica Jones as the hawk woman and Max Alvarado as the giant. Niño Muhlach was the only “Ding” who shared title role and equal billing with the main bida – “Darna”, simply because he was the child wonder of the 70’s mid ’80’s. Most of the child superstars of local movies were girls like Tessie Agana, Snooky Serna, Aiza Seguerra and Onin broke that tradition.

They were the child stars who made movie hits one after another, with the plots of their movies revolving around them. They were swamped with movie offers and became busy doing projects one after another. Ate Vi was also considered as a popular child star during the 60’s, she made hits like Trudis Liit, Ging etc and even received her first FAMAS award at a tender age. But as a child star, Ate Vi cannot be compared to Niño. Nino can carry a movie all by himself, while Ate Vi, though she made title role movies which also made good at the box-office, made and accepted a lot of supporting roles as a child star like the role as the young Imee Marcos in Iginuhit ng Tadhana or the daughter of Eddie Rodriguez and Lolita Rodriguez in “Hindi Nahahati ang Langit.”

As one writer said: Nagrigodon si Vilma as daughter sa triangle nina Eddie Rodriguez, Lolita Rodriguez and Marlene Dauden. Their triangle was a big hit then and Ate Vi almost always acted as daughter to one of them. Niño, on the other hand, maintained his lead role character as a child wonder, if not bida it should be an equal role to the bida like a movie with FPJ or Dolphy and yes with Ate Vi as Ding in the title role. Unfortunately, Niño was not as blessed as Ate Vi, who was able to transcend from child star roles to teen lead roles with ease and success.

When Niño reached the awkward age, box-office receipts of his movies were not as good. He had no choice but to accept second or third lead roles like his movie with Aga Pops (Oks na Oks Pakner) in the 80’s, and worst, made an almost extra role in the Judy Ann-Mickey Arroyo movie “Mahal Kita Maging Sino Ka Pa”. Table turned and he became the supporting star of his cousin Aga who used to be his extra during the ’70s. In fairness, Niño became a business icon though he did not reach the stature of his cousin’s (Aga) success as an actor, the former is very much satisfied with his earnings right now, he was the youngest investor at the age of nine when he own a building in San Juan named after him, the El Niño Apartelle. He also owns and manages a bakery that makes delicious ensaymada that melts in the mouth. He is now enjoying the fruit of his labor.

The famous child actress Vilma Santos grew up as a beautiful young star and was able to maintain popularity from the ’70’s up to the present. Her title “Star for all Seasons” fits her well because among her contemporaries, she is the only one who stays on top. She can choose the roles that she wants, and is still deluge with movie offers complete with top billing and huge talent fee, that even the likes of Claudine or Judy Ann can only hope for. And why not? She is the Queen! And she deserves nothing less! She is considered the Box Office Queen of all time. Blessings continued to pour for Vilma, from film awards to public service recognitions.

She is also the only actor to have crossed over from showbiz to politics and was graded satisfactorily. And like what Mar Garces, our famous house writed said, “you ain’t see nothing yet, the best is yet to come.” What do they have in common (Vilma and Niño)? They are both considered as among the richest celebrities in local industry. In wrapping up, we can say that Niño started as a child wonder ended up as a successful businessman; he is now accepting small roles. Vilma Santos on the other hand, continues to shine her star and is considered as the longest reigning Queenstar of all time. To you Darna at Ding. Fly high! – Franco Gabriel, V Magazine 2009 No. 5 (READ MORE)