Yesterday, we attended the taping of Homeboy wherein si Ate Vi was the sole guest ni Mr. Boy Abunda. It was a fun Episode, with a band playing ate Vi’s songs like Sixteen, My Boy Lollipop and others, after each commercial gaps. May mga surprise guests din like the Big Brothers evictees and Luis Manzano. According to Mr. Boy the said episode will be aired on Monday, Nov. 21. So, please watch out for it. On Friday, Nov. 18, naka-sked ang last shooting day ni ate Vi for MMK.

When we asked her about it she jokingly said, “I have to squeeze that into my schedule, kung hindi baka sa 2008 pa ito maipalabas.” sabay tawa. Looks like may isa na namang big award na maibibigay kay ate Vi, hindi ko lang muna sabihin until everything is final. I already asked her about this, pero true to her humble self, hindi pa nagcomment si ate Vi. I will post it here as soon as I get the confirmation. Please continue voting sa Yes Magazine, last time i check wala na ang tally for the “others” category. We have to vote more for ate Vi. Thanks sa lahat for cooperating.

Recently, Ms. Rosa Rosal was confered a similar recognition by FEU. Aside from her, wala na yata akong matandaan na nabigyan rin. This recognition from the Lipa City Colleges, is just the beginning. Alam ko, marami pang ibang colleges and universities ang susunod, dahil talaga naman deserving si ate Vi. Pero what is an Honorary Doctorate or Doctor Honoris Causa? I’ve surf the net is this is what I got: read on. 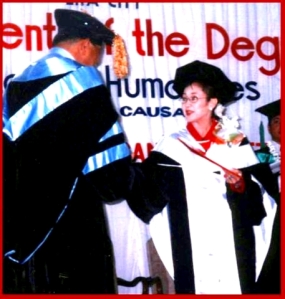 The conferring of an honorary doctorate or doctor honoris causa still follows, sometimes, an old protocol (formerly in Latin). Nowadays the attribution of an honorary title such as doctor honoris causa can mean recognizing and distinguishing an outstanding person who contributed notably to his or her field of expertise, higher education or a specific institution simultaneously honoring the recipient and the institution rewarding or encouraging past or future donations.

Most regulations insist on the moral qualities of the honorary doctorate recipient. Another significant criterion for the nomination of a doctor honoris causa is the recognition by his peers. Doctors honoris causa can be seen in all the fields of knowledge, such as arts and letters, exact sciences, social or human sciences, philosophy etc.

Honorary distinctions can be of varied levels, the most appreciated one being, of course, that of honorary doctor (doctor honoris causa), although the one of outstanding professor (professor emeritus) is not looked down upon by teachers whose own university would not dare to grant them an honorary doctorate, at least as long as they are active.

In agreement with the rules of the Université Multiculturelle Internationale, Epictetus College concedes an honorary master’s degree (magister honoris causa) or an honorary doctorate (doctor honoris causa) according to two essential criteria the personal merit of the nominee the recognition by his peers

The rank of doctor is recognized in the same way whether it has been obtained on a purely honorary basis or otherwise, it is designated by simply writing Dr. before the name, just as at one time a postgraduate doctorate, a university doctorate and a state doctorate coexisted in France with only one common designation for any of the three. Ang galing, ano? Hindi ba dapat tayo talagang maging happy dahil vilmanian tayo? 😉 So, from now on, will it be Dr. Vilma Santos-Recto na, instead of Ate Vi? Oh, well, life is beautiful. – Eric Nadurata, V Magazine, No. 5 2005 (READ MORE)

Update – Dr. Vilma Santos-Recto received her second Doctorate degree on November of 2009, this time from the University of North Eastern Philippines in Iriga City, Camarines Sur. Then on April this year, Dr. Vi received her third honorary degree from Batangas State University. – RV