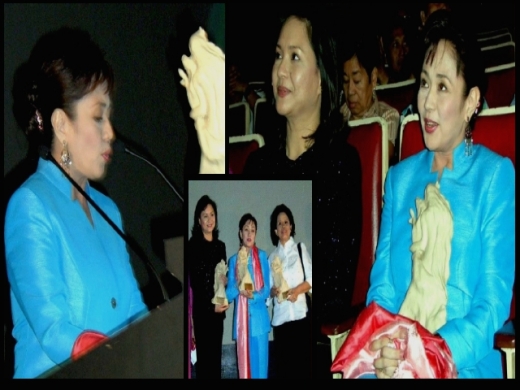 The Diwata Awards – “…The Diwata Award recognizes and honors women and bestows this award to women who have successfully contributed original text to the growing materials and narratives on women sensibilities that aim to empower women who have been marginalized in the traditional film text. It also pays tribute to their outstanding contributions to their field of cinema. The Diwata in Philippine folklore is likened to the muse that inspires artists in crystallizing ideas, concepts, and conversations as they interact with their materials…”

March 8, 2006 – “…Vilma Santos had a meeting with her Vilmanians the other Friday at Max’s Libis. She reported that she had finally finished shooting her Maalaala Mo Kaya episode with Ricky Davao and Maja Salvador, directed by Olive Lamasan. “One year in the making ito, bale two episodes, but it’s really worth it and I’m impressed with the work of Direk Olive,” she says. “It’s based on the true story of a woman from Lipa.” She said she got an offer to do a stage play at the CCP. She’s willing to try the theatre but when she was told she has to rehearse for two months, she had to turn it down as she still has her duties as Lipa City mayor to attend to. She revealed she has new movie offers, but most of them are heavy drama. She wants to do something lighter that will be more appealing to the masa. Last March 8, Vilma was given the First Diwata Award in celebration of International Women’s Day. That coincided with the 16th International Women’s Film Festival by the UP Film Institute, the longest-running women’s filmfest in the country. She was cited for her roles in films like Sister Stella L, Relasyon, The Dolzura Cortez Story, Bata, Bata, Paano Ka Ginawa? and Dekada ’70, which are about women empowerment. She was honored with Lily Monteverde, Charo Santos-Concio and writer Lualhati Bautista. Vilma was warmly applauded by an adulating crowd and she delivered a very inspirational message, saying: “I strongly believe in these films with strong messages. It’s about time men believe in women empowerment. Don’t underestimate us, women and artists!” Ate Vi left Thursday with husband Sen. Ralph Recto to attend the investiture rites of our new cardinal in Rome (she was personally invited). After that, she will take a cruise with Ralph and meet with her family in Los Angeles…” – Mario Bautista, People’s Journal March 26 2006 (READ MORE)

University of the Philippines – “…In 2005, the University of the Philippines conferred to her the Gawad Plaridel Award for her achievements and contributions both as an actress and a public servant. In the same year, she was conferred an honorary doctorate degree (honoris causa) in humanities by the Lipa City College. She was again honored in 2006 by the University of the Philippines as one of the four awardees in UP’s First Diwata Awards. “Ako’y napakarelihiyosong tao sa maniwala ka o hindi. Sa aking kalooban, inaalay ko sa Diyos ang aking mga tagumpay at mga suliranin. Nagpapasalamat ako sa Kanya sa mga magaganda’t mabubuting nangyari sa akin. Kung hindi naman, iniaalay ko pa rin sa Kanya kung iyon ang kalooban Niya. Ang hinihiling ko lamang sa Kanya’y tamang patnubay (“I’m a very religious person, whether you believe it or not. Deep inside, I offer all my success and problems to God. If they’re beautiful and good, I thank Him. If they aren’t, I still offer them to Him if that is what He wants to happen. What I only ask from Him is proper guidance),” she said…” – Rogelio Constantino Medina (READ MORE)

Vilma Santos, is the Philippines’ most awarded and critically acclaimed actress and longest reigning box office queen. One of the original Philippine movie queens, she rose up to become the versatile actress that has been given the fitting title of “Star for All Seasons” and more recently “Woman for all Seasons” because of her capacity to adapt to the changing mores and values of the Filipino woman, giving a face to their plight and struggles. She is currently in politics as the Governor of Batangas province, Philippines. She was also formerly Mayor of Lipa City, Batangas. – Agimat (READ MORE)

Maria Rosario Santos known as Charo Santos-Concio or Charo Santos (born October 27, 1953) is a Filipina television executive, host, actress, and film producer who hosts the network’s longest-running drama anthology Maalaala Mo Kaya. She is the President of ABS-CBN Corporation, and plays a powerful role in TV and film production in the Philippines. On March 3, 2008, Ms. Charo Santos-Concio was promoted as 5th president of ABS-CBN Broadcasting Corporation and in charge of the company’s total business portfolio, taking over from interim president Eugenio Lopez III. – Wikipedia (READ MORE)

Lily Monteverde – Lily Yu Monteverde (nickname Mother Lily) is a prominent Filipino film producer and businesswoman. Lily Monteverde has produced nearly 300 films in the Philippines since the early 1960s. She operated Regal Films, in the Philippines for many years. In August 1996 she invested much of her substantial wealth into hotels in Quezon City. She opened the Imperial Palace Suites on the site of an old gasoline station at the corner of Tomas Morato and Timog avenues in Quezon. In 2000, she received the Lifetime Achievement Award from Cinemanila International Film Festival. – Wikipedia (READ MORE)

Lualhati Torres Bautista (born Manila, Philippines December 2, 1945) is one of the foremost Filipino female novelists in the history of contemporary Philippine Literature. Her novels include Dekada ’70, Bata, Bata, Pa’no Ka Ginawa?, and ‘GAPÔ. Bautista was born in Tondo, Manila, Philippines on December 2, 1945 to Esteban Bautista and Gloria Torres. She graduated from Emilio Jacinto Elementary School in 1958, and from Torres High School in 1962. She was a journalism student at the Lyceum of the Philippines, but dropped out even before she finished her freshman year. Despite a lack of formal training, Bautista as the writer became known for her honest realism, courageous exploration of Philippine women’s issues, and her compelling female protagonists, who confront difficult situations at home and in the workplace with uncommon grit and strength. – Wikipedia (READ MORE)

Laurice Guillen is a Filipino actress and director. Guillen studied at St. Theresa’s College, Cebu City, before working on a Masters in Mass Communication at Ateneo de Manila University, followed by a television production course under Nestor Torre, in 1967. She then began work as an actress, starring in productions of Mrs. Warren’s Profession, before crossing over to film and television work, playing a seductress in Tinimbang Ka Ngunit Kulang, and Corazon Aquino in the drama A Dangerous Life. In 2009 she accepted a role in the indie film Karera, her first role in an independent production. Other credits include in the film Sister Stella L and Moral. – Wikipedia (READ MORE)

Bella Flores – “…She is Bella Flores and proud that she has played the wicked tormentor of children from Tessie Agana in 1951 in Roberta, to Vilma Santos in Trudis Liit in 1963, to Maricel Soriano in Inday Bote in 1970. “I walk alone. I pray alone. I talk to God na huwag ako pababayaan. There are times I feel lonely, natural lang yun. I know God is always with me.” While she relates her story, of how she distrusts everyone which is why she opts to live alone and refuses to hire a live-in driver, there is something in her demeanor that tells you it is possibly just another role she is playing. “I don’t have close friends. We meet on the set, then go home. But there are people like Susan Roces, Gloria Romero, Pablo Gomez whom I like. Friends are the ballroom dancing friends, although I stopped dancing in 2002 when I became very busy,” she continues sounding much like the sure-fire recipe on how to be hated by an audience…” – Bibsy M. Carballo, The Star, 14 March 2008 (READ MORE)