Pre-1976 – Although Vilma Santos showed great promise the previous year, all with her dramatic projects like “Nakakahiya?” with Eddie Rodriguez; “Karugtong ng Kahapon” with Eddie Garcia and Gloria Romero and “Tag-ulan sa Tag-araw with Christopher de Leon, it was Nora Aunor who owns 1976, at least in terms of notable films.

Means Business – “…People who used to smile and wink when they talk of Nora Aunor as an actress should see this film, because the lady is determined to show everybody that she means business both as an actress and as a producer. In this film she is successful as both…In the end, Mario O’Hara symbolizes man’s fate as helpless creature buffeted by the winds of adversity but still turning to God by a blind man who lights a candle as a procession enters the church to mark the return of normalcy. The tragic fate of Rosario, Crispin and Masugi goes against the grain if traditional “cine Pilipino” which insists on a happy ending. And for this we must thank conscientious craftsmen like Mario O’Hara and Nora Aunor for their concerted effort. “Tatlong Taong Walang Diyos” is without doubt one of the best films of 1976…” – Pio de Castro III, The Times Journal 1976 (READ MORE)

Good Sign – “…Then she did Mga Rosas Sa Putikan for her own VS Films where she played a country girl forced into prostitution in the big city. The movie did fairly well at the tills. Good sign…” – Ricardo F. Lo, Expressweek, Jan 19 1978 (READ MORE)

Post-1976 – After Nora’s triumph in both FAMAS and Gawad Urian, Vilma seems to be reawakened the following year by the success of “Burlesk Queen.”  The film earned her nominations from Famas and Gawad Urian but failed to secure her the trophies. Despite this, 1977 seems to favor Vilma more than Nora in terms of quality output.  Aside from Burlesk Queen, she did “Dalawang Pugad Isang Ibon” directed by Bernal, “Masarap Masakit Ang Umibig” directed by Elwood Perez, “Pulot-gata, Pwede Kaya?” with Romeo Vasquez and “Susan Kelly, Edad 20” with Dante Rivero, these films were smash hits. Meanwhile, Nora did twelve films, her only award worthy film was “Ibilanggo si Neneng Magtanggol” where she won the best actress in Davao Film Festival and a nomination from the Metro Manila Film Festival for “Bakya Mo Neneng.”  Like Vilma in her past year, Nora had a similar run, “high on output and commercial success but low on quality, worthy of acting awards” (“Little Christmas Tree” wirh FPJ and “Bakya Mo Neneng” with Joseph Estrada were both mediocre films).  With Vi and Guy’s careers on fire in term of box office success, the next year would be a test on who will sustain popularity, as more worthy project will come their way. 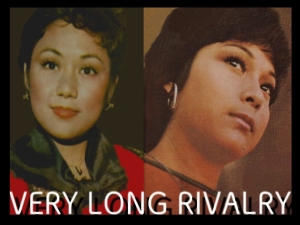