Pre-1972 – From late 1960s to 1971, comes the arrival of the musical era and the arrival of the golden of voice of Nora Aunor. Aside from stocking success in music, Nora ventured into films, with string of films that featured other singers like Eddie Peregrina, Edgar Mortiz, Manny de Leon, Victor Laurel and Victor Wood. Films that begin with singing and mostly ends with big production number, all with singing and dancing – ala-Bollywood. Venturing to film making, Nora found her rival, “dramatic-child-star” now a strugling “teen-film-star” in a “musical-era,” Vilma Santos. Although the competition was slightly in favor of Nora, she found herself in numerous occassion, having a strong resistant from Vilma. On 1971, there were atleast one Nora or Vilma film showing in local movie houses. Nora Aunor did seven films (Always in My Heart; Ang Waray at ang Talyada; Guy & Pip; Lollipops and Roses; My Blue Hawaii; My Prayer; The Singing Filipina) and Vilma Santos did nine (Angelica; Eternally; Ikaw Lamang; Love at First Sight; Our Love Affair; Teen-Age Senorita; The Sensations; Wonderful World of Music; Young Lovers), most of these films were musicals. The next year, comes the confirmation of their rivalry.

Nora Aunor’s 1972 Films (8): (And God Smiled At Me; Dito Sa Aking Puso; Gift of Love; Kung May Gusot, May Lusot; My Little Brown Girl; Nora, Mahal Kita; Way Out In The Country; Winter Holiday) – Most of her films capitalized on her golden voices and untapped dramatic talents.

Nora Aunor’s 1972 acting recognition (2) – Best Actress from Quezon City Film Festival and a nomination from FAMAS both for “And God Smiled At Me.”

Dual Roles – “…Vilma as Armida is drab and dry, almost a movie prop. It is in the portrayal of Rosanna that Vilma would tear one’s heart away. The many close-ups so effectively used throughout the movie show the unglamorous Vilma: her frowns, her lip-twitching, her uninhibited and stifled sobs. But Vilma is less successful with the shifty look that is the distinctive trait of the deranged. She compensates for this in the ‘betrayal’ scene when Rosanna suspects that Leo, Armida and the psychiatrist (Fred Montilla) all conspired to imprison her in the hospital. Another outstanding feat is the subdued scene where Rosanna learns that Leo has gone to the Lerma villa to meet Armida. The vivacious Rosanna is just as winsomely pathetic. Watching her is just like seeing a bosom friend trying to pretend she’s happy when both of you know she’s not only in this case, Rosanna is truly happy. Her non-knowledge of her plight is what is particularly heart-curling…” – Times Jornal, October 24, 1972 (READ MORE)

Golden Voice – “…They’ll wait for the perfect timing, he says and then he’ll tell his wife Olga (Lucita Soriano) everything. The perfect timing never comes. One morning, Celina just can’t help calling him ‘Itay,’ telling him she loves him very much and that he must come home at once, please. The tender moments take too long, and everybody in the theater knows Damian is ‘tsk, tsk, tsk, mamamatay.’ Everybody is right. At the hospital, the secret lets loose as Celina jerks in agony. ‘Itay, Itay,’ she sobs, in the presence of Damian’s wife and two adopted daughters. Here, Nora’s bid for a best actress award really begins. The three witches (oh, how the fans hated them) now maltreat Celina all the more, slapping her, pulling her hair, kicking her right in the tummy. All through these, Celina’s only consolation is her love for Carding (Tirso Cruz III), the laundry-woman’s (Nenita Jana) son. He is blind. He is desperate. He loves Celina very much but ‘wala akong karapatang umibig.’ And so he contemplates suicide, sneaking out one night, begging between yells of ‘Gusto ko nang mamamatay,’ for a vehicle to run over him. An irked driver shouts at him: ‘Ano ka ba, bulag?’ A woman fan shouted too: ‘wag kayong tumawa, serious yan.’ And then, what do you know, another death: not the blind leading man (that would’ve been a blunder) but his mother, who had followed him. After so much unbearable beating and tearful moments between the lovers, Celina delivers her ultimate prayer — she can’t take it anymore. AND GOD SMILES AT HER. God grants her a golden voice (for a while one thought that was only the beginning of the movie, after no less than two-and-a-half hours) and she sings all her heart at the foot of the altar. And this is not the end of it…” – Times Jornal, October 24, 1972 (READ MORE) 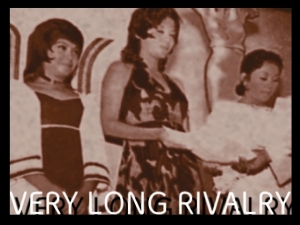