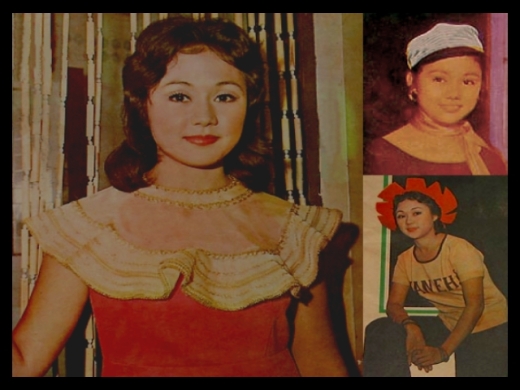 We’re back!.” once more to bring you the best of the best on Ate Vi. Fresh from the success of the maiden issue of our newsletter, the V-5 is back. This time theyre not just five, but five times five. The talented and wonderful Vilmanians across the globe have joined forces to come up with more exciting contributions and write-ups to ensure that only a quality and entertaining newsletter is delivered right at your door. Besides, this newsletter is for all of us – you and I, the forever Vilmanians! We thank everyone who have appreciated our first salvo and those who unselfishly imparted suggestions and encouraging words, including the negative ones. We truly appreciate them Rest assured that we would take everything positively and constructively. Our theme for the second issue as Rendt emphasizes to us, is Retro/Nostalgia. What a fitting follow-up indeed!

For there’s so much that can be written of the Philippines’ legendary and ultimate movie queen. Having weathered a successful career that spans for three decades now. Yet, I’m in quandary as to how would I start. Perhaps, words arent enough to describe her majestic resume and refreshing persona that anyone who intends to write about her would be taken aback in bewilderment. But alas! As I contemplate in front of my PC, a perfect word came along. And this is it – “Viva La Vilma!” “Perfect!” I said to myself. And the keyboard started to tick. It’s a nomenclature that speaks of the Queen Star’s revered stature in the Philippine movie industry as country’s prime and greatest actress of all times, and Star for All Seasons and Reasons. Likewise, it hails of the diminutive actress’ charm and strength in political arena where she is now serving her third term as Lipa City’s mayor, and the bright promise of an endless possibilities her innate and God-given talents will bring.

What’s in a name anyway? Spelled as capital V-I-L-M-A. Let me put words to each to get the right picture.

V – is for victorious! Indeed she is, right from the start. Her very first outing into celluloid world in 1963 where she was then 9 years old via the film “Trudis Liit” opposite Lolita Rodriguez bestowed her that year’s FAMAS Best Child Actress. Also worth mentioning is – at that same year while filming Trudis, she is wrapping up another movie titled “Anak ang Iyong Ina” where she shared stellar highlights with acting stalwarts, Gloria Romero and the late Rita Gomez. Thus, shes the only child actress who started her career via two movies. What a feat! And La Vilma did. The winning streak continues. From Trudis Liit (1963) to Mano Po 3 (2005), the victorious La Vilma always emerges triumphant year after year even in the midst of storms that beset her in life, she wears still the crown. Nothing and no one can ever stop the winningest actress of all time, La Vilma. The record speaks for itself: Four-times Grand Slammer for Best Actress  1982 in “Relasyon,” 1993 in “Dahil Mahal Kita (The Dolzura Cortez Story),” 1998 in “BataBata Paano Ka Ginawa?,” and 2002 in “Dekada 70.” 8 times URIAN awardees for Best Actress (one more is coming up), 6 times in PMPC Star Awards for Movies, and 5 times in FAP. Best Actress Hall of Fame in FAMAS and Lifetime Achievement awardees. Box Office Queen Hall of Fame awardees. Cine Manila and Brussels International Film Festival Best Actress awardees. And lots more. The list goes on and on.

V – is also for versatility! Only La Vilma can essay varied roles in every movie she made with finesse and perfection. This is very true during the early 70’s especially after she won her very first FAMAS Best Actress trophy via “Dama de Noche” in 1972. She was the super Filipino flying heroine in “Lipad, Darna, Lipad,” the all-time favorite and most successful Darna movie ever made, box-office wise speaking. The testament to her effectual performance of this Filipino heroine is her having played the role four times, namely “Lipad, Darna, Lipad,” “Darna and the Giants,” “Darna and the Planet Women” and “Darna at Ding.” That’s another feat unparalleled in the history of movie-making that only La Vilma can deliver.

She was the beautiful mermaid in “Dyesebel at ang Mahiwagang Kabibe,” the champion of the jungle in “Wonder Vi,” and the action heroine in “Vilma Veinte Nueve,” “Phantom Lady”and “Vivian Volta” – all box-office hits of the 70’s.

She’s exciting to watch in heart-pounding, hair-rising suspensehorror movie in “Kamay na Gumagapang” and “Anak ng Asuwang,” and in heart-warming drama-fantasy movie “Kampanerang Kuba,” the latter now being aired as ABSCBN’s latest teleserye. She’s equally refreshing and hilarious in “Kundoktora,” “Teribol Dobol,” “Tok Tok Palatok,” and “Vilma and the Beep Beep Minica” where she played a young socialite opposite a talking minica. The latter movie was truly hilarious. The audience had a great laugh when it was shown in theatres many years back.

Indeed, that’s versatility at its peak that only La Vilma possesses. Shall I need to say more? But let’s finish it anyway.

V – is for Victorious and Versatility.

I – is for ingenuity. The QueenStar never stop reinventing herself. She has a lot of creativity in her sleeves. Her latest project would be another off beat role, Star Cinema’s “Flores De Mara.” She will be playing a mother to three gay sons.

L – is for longevity. At 51, she still commands the highest pay in Philippine movie world. She was recently named the All-Time Favorite Actress by Guillermo Mendoza Foundation. Whats the secret of her longevity? It’s her dedication and love to her career and her humility.

M – is for magnanimity. Vilma’s kindness and benevolence to both her family, her constituents in Lipa and to her millions of adoring fans are shining testimonies of her being God-fearing and magnanimity of her heart. She’s both a blessing and a blessed lady.

A – is for affinity. Vilma is not just an actress, an A1 star, Mayor, but a friend, a sister, and a mother to millions and millions of Vilmanias at every nook of the world, and in all strata of life. She is a part of the family. Remember, the adage “We are family?” That’s what we are. Therefore, the next time we say V-I-L-M-A, theres only one beautiful woman that will come up to our mind, none other than the woman of substance, Lady Vilma. Long Live the Queen! Viva La Vilma! – Charles Gomez (READ MORE)