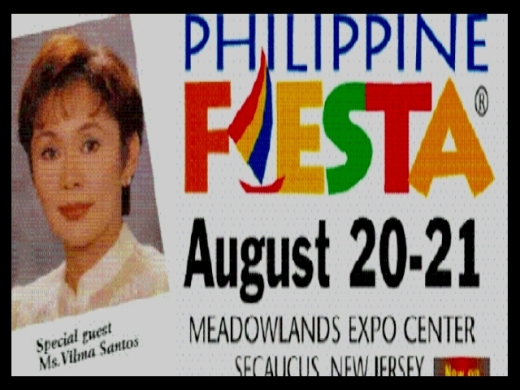 (Despite the threat of tropical storm Irene, The 7th. Annual New Jersey, U.S.A. Pinoy Fiesta was a box office hit!)

A week before the 7th. Annual Philippine Fiesta in America was held in New Jersey (August 20 to 21, 2005), featuring Lipa Mayor Vilma Santos-Recto as special guest, tropical storm Irene was spotted in the Atlantic Ocean and was predicted to become a hurricane that will hit the East coast. Record increase in the price of oil and gasoline are looming in the horizon. The weather was hot, hazy and humid and if it persisted, there will be evening thunderstorms. Either of the above would surely affect the attendance of what is considered the biggest annual reunion of Filipino-Americans in the East coast. Miracle of miracles, Irene veered into the ocean, and the weather was in the mid to upper 80s, just perfect. God must have smiled at Mayor-Actress Vilma, the Glad girl. Like a homing pigeon, the Honorable Mayor and the Philippines’ most awarded actress must spread joy to her fans in the East coast. Together with her husband Senator Ralph Recto, they conquered the hearts, minds and spirit of their assimilated, albeit homesick kababayans by gracing the annual Fiesta of trade exhibitors, international and local entertainers and cultural and food festival. 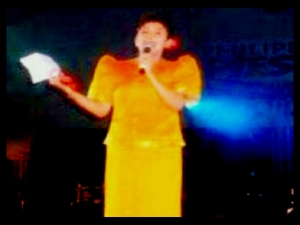 Like Vilma’s movies, the weekend extravaganza was a box-office hit. As per Alan Trambulo, NY President of VISION (Vilma Santos International Online Network), Pinoy Fiesta producers Nanding and Mila Mendez were more than pleased with the overall results of the 2005 Fiesta. “This is perhaps one of the best, even better than last year,” they chorused. We were so happy and honored by Vilma’s presence. She is very professional, madaling kausapin, and very concerned about the outcome of the Fiesta. Right after the doors closed last Sunday, she asked us if she did alright and if the affair was a success,” they continued. “That is genuine personal touch and concern,” the duo gushed. Imagine, a big star like Vilma, very concerned about how we did, wow, that was special. No wonder she is a respected and beloved three-term mayor. She truly deserves the awards and blessings that come her way. We would invite her again, they concluded. A non-singer but blessed with a charismatic pesonality, all Vilma had to do is to be seen by the huge crowds, talk and wave to them as she began to weave magic. Vilmania is very much alive and kicking. 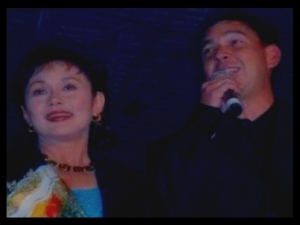 EVERYBODY LOVES VILMA! The multi-awarded Mayor and Actress and her Senator husband, fresh from arriving at the JFK Airport Friday, August 19, jet lag and all, were honored at the welcome reception gala party thrown in by the Batanguenos of the East Coast, in cooperation with the Philippine Fiesta USA, Inc. at the Newark-Sheraton. The party was to also showcase the talents, ala American Idol of the 2005 Miss Philippine Fiesta USA Beauty Pageant Finalists. The hall was packed with people, Batanguenos, Lipenos and of course the Vilmanians. As soon as the famous couples names were announced (the Honorable Mayor of Lipa and the Philippine Senator), there was standing ovation. The world stopped, ahhs and oohhs were heard as two souls waved to the crowd, smiles and all. They sat at the presidential table where the Jersey City Mayor Healy and other dignitaries were seated. After small talks and talent presentation by the beauty contest finalists, this event followed: “Presentation of Key to Jersey City to the Honorable Mayor Vilma Santos-Recto by the Honorable Mayor Jerramiah Healy.”

The Lipa mayor literally was given a key – symbol of respect and admiration for a beloved and most awarded Philippine mayor. Unprecedented. History in the making. The Filipinos couldn’t be more proud. Hail to the Queen! Then, after the Inspirational remark by Honorable Cecilia Rebong, Consul General, Philippine Consulate, New York who spoke highly of the guest couple’s outstanding achievements, Mayor Vi and Senator Ralph took turns to speak to the crowd. Says Mayor Vi: “Never in my wildest dreams did I think that I would be a public servant. All my life I’ve been an actress. I was visible because my husband is a politician. He challenged me to run as Mayor. I was hesitant, tentative and nervous. I asked God to give me a sign, like something white before I say yes to the challenge. One day, fresh white daisies for the altar were delivered by my florists that I did not ask for. That was it. Then Ralph laid the cards on the table as to what being a public servant would entail. To learn more about public service, I enrolled at the U.P. crash course on pubic administration. Three mayoral terms later, I concluded that without Gods help and the unity and cooperation of the people and my cabinet, Lipa wouldn’t be what it is today I only have two years left to serve and my options are open. The crowd, in standing ovation, chorused: “governor, governor!” The Mayor just smiled her sweet smile and exclaimed: Mabuhay ang mga Lipenos, mabuhay ang Pilipino, mabuhay ang Pilipinas!” 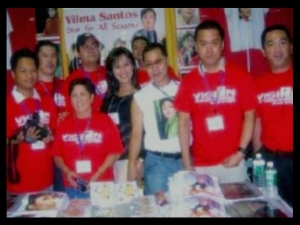 MORE DEAFENIING APPLAUSE…MOVE OVER, SISTER STELLA L…Then Senator Ralph spoke and concurred that his wife was nervous at first but as he guided her along the way, he was more than surprised. She learned fast. She seized the opportunity, rolled up her sleeves and just did her homework, with flying colors. He mentioned his achievements as Philippine Senator, and vowed to make a difference in Philippine politics.

APPLAUSE. Autograph signing and photo ops with the famous couple capped the night. The whole world went gaga over Vilma and Ralph. Is this a good omen of things to come? Like that Palace in Manila? Just asking! Fast forward to August 20, Saturday. At around noon, the QueenStar, along with invited dignitaries, cut the ribbon and waved and said hello to her overjoyed audience. She was onstage. She vowed to come back in the evening with Senator Ralph. The musical numbers followed. Some bands played rock and roll. Aiza Seguerra wowed the crowds with her voice and guitar. She brought the house down when she sang her signature song, “Pagdating ng Panahon.” Then, it was a laugh riot session with Nannette Inventor, Jon Santos and Leo Martinez with their satire/spoof called Kiliti-kal Condition. They traded barbs, spoofed politicians and celebrities through seriocomic skit/songs, really a no holds barred session. If Mitch Valdez was in the cast, people would be asking for Maalox or Pepcid. It was Humorous, Inc., “kabag” included. 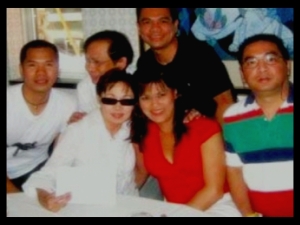 Meawhile, at the VISION booth, the Vilma faithful began to form a queue – waiting for their idol to pop in and memorialize her precious autograph on memorabilia, from her 23-song CD album, to VISION tee shirts, magazine, blown-up photos and what have you. In their red VISION tee shirts, Alan, Jojo, Franco, Eric C., Mario and others were on red alert should pandemonium follow Vilmas live signing session in the booth area. The booth merchandise had good business (financial donations by the Vilmanians), proceeds of which were intended to help the needy and poor Vilmanians in the Philippines.- It is a virtual Vilma Santos retrospective: tee- shirts, mags, photos – made possible by Philippine VISIONaries Jojo Lim, Eric Nadurata and Co. Vilmanians from all over the U.S., young and old, professionals, ordinary people, weird or straight were vacillating whether to stay in line or troop to the stage area where Vilma may be next performer. The crowd was split. They mused. Hmmm She won’t sing definitely, but will she dance? Will she give a political speech? What will she wear? What will she say to the growing yet patient crowd? How does she look like in person? Is she still pretty? Does she still have that famous Vilma smile and karinyosa ways? Will she don a Darna costume or do a Sister Stella L. act? Anxious, Unlimited. I need my Xanax, please! It is half past eight? Do you know where Vilma Santos is? Was that her on stage wearing a terno ala Mayor Vi, complete with the Vilma hairdo with a flower and a hankie? Nope. That was impersonator par excellence Jon Santos. 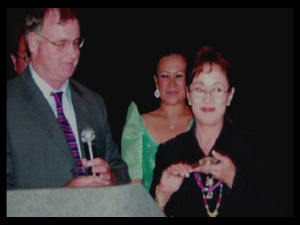 And then the moment of truth: Vilma and Ralph on stage, live! It was Vilma! all over again. “Bumabati po kami sa inyong lahat ng magandang gabi.” “OK,” she said, while holding a bouquet of yellow roses, while Ralph was smiling beside her. “Magtanungan portion po tayo.” Fans’ queries ranged from common to the sublime. Vilma: “My two sons are OK. Luis just finished college. He is wise with his money. He saves for the future. My youngest son Ryan is now eight years old. He loves acting…I have two more years to go for my third and last term for Mayor. I don’t have a political agenda at the moment. I did it through the help of God, constituents’ trust and cooperation. I am so blessed. Movies? I will just do one movie a year as time and my Lipenos will allow me.” Ralph: “Me for President? Maybe I’ll win if I was Christopher De Leon. No, seriously, our country needs your prayers and support. To run for President needs a lot of planning and consideration.” VST and Co.’s disco number, Awitin Mo at Isasayaw Ko was playing and the couple gamely danced the swing. Vilma waxed nostalgia of the glorious Vilma/VIP Dancers heydays. They had the audience at the palms of their hands. Are they the future President and First Lady? Just asking. Then the 2005 Fiesta celebrity guests (Vilma, Aiza, Nannette, Jon and Leo) all went to the stage to sing Bayan Ko. The audience joined in. Patriotism, Pinoy style, anyone? It is time to connect with an enthused crowd. VTR’s and cameras in all shapes and sizes were capturing the moment. Handshakes with the fans. Security guards did their job well. They held the King and the Queen tight, like protective secret agents. Pray, tell me, are they the future President and First Lady? The lights went off onstage but the crowd was just getting to love Vilma more. Handshakes all over the place. Tears of joy flowed. Ate Vi! We love you! The security guards moved in to get Vilma. 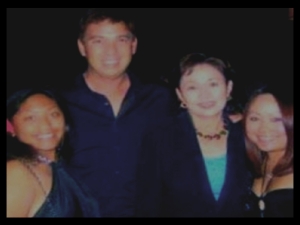 The crowd went wild over the Queen as a human chain of guards and Vilmanians Franco, Jojo and others led her from the stage to the signing booth. She first hugged the Vilmanians who are now in their golden years. Vilma, misty-eyed, recognized them all. Sitting on a chair, with a table in front of her, she was the virtual Movie Queen -uncomplaining, always smiling, always cool, calm and collected. Ate Vi, now sweating, signed anything brought to her by the fans  a shirt, CD, DVD, magazine, in rapid succession. She was kissed, hugged, praised, and ogled at. She is still it – the most beloved Actress of the Philippines. Incredible! But wait, the crowd was getting into Ate Vi’s private space. Anything could happen. The Mayor/Actress’ life could be in danger. Her family, fans, country, and the world need her. Guards were quick to whisk her away from the madding crowd. And there she was, the Glad girl, with a smile on her face, still being kissed and hugged by the people till she disappeared from the crowd. As the late Nick Joaquin quoted: she chose to be happy. Awards, a loving family, an honorable public office position with big responsibility and accountability, respect/love from the fans, longevity in the business, movie offers ad infinitum – these are but bonuses. She has everything. Happiness, Inc. It’s contagious. Vilma Santos Rules! – Mario O. Garces (READ MORE)