“…Congratulations to Batangas Gov. Vilma Santos who was conferred a Degree of Doctor of Humanities Honoris Causa by the Batangas State University for her clean-governance and humanitarian advocacy. The award was given to her during the university’s 46th Commencement Exercises (with the theme “Global Mobility; BatStateU Quest Towards Excellence”) last April 2 in Batangas City…” – Rikcy Lo, , The Philippine Star, 05 April 2014 (READ MORE)

UNEP to Confer Honorary Degree to Batangas Governor – This City of Superstar will have, as its guest another superstar as the University of Northeastern Philippines (UNEP) is set to confer to Batangas Governor Vilma Santos-Recto the honorary degree of Doctor of Humanities in recognition of her exemplary contributions to Philippine cinema and government service during a fitting ceremony on Nov. 20 at the university gymnasium here. Lawyer Remelisa Alfelor-Moraleda, UNEP president, said the conferment of the honorary degree to Governor Santos was approved by the Commission on Higher Education (CHED) during the commission’s executive board meeting on Feb. 11 this year. Moraleda said UNEP is bestowing the doctor of Humanities, honoris causa to the multi-awarded actress and provincial chief executive as she embodied the true ideals of an empowered woman, who used the powerful medium of cinema for social awakening and as a governor, she exercises the same power to effect positive transformation in the lives of his constituents in the province of Batangas. The Star for All Seasons as the Batangas governor is known in Philippine cinema is a FAMAS Hall of Fame awardee, having been awarded the coveted and prestigious award as Best Actress for five consecutive years. Ate Vi as Governor Vilma Santos- Recto is fondly called by her loyal and avid fans, is also the only actress who was twice given the FAMAS Circle of Excellence Award. Ate Vi is also the recipient of the Lifetime Achievement Award from the Film Academy of the Philippines in 1996 to 1998.Aside from these awards, the Samahan ng Manunuri ng Pelikulang Pilipino (URIAN) honored her as Best Actress in 1982,1983 and 1984. She also received five other similar awards from different award giving bodies including one in 1998 from the Belgium International Film Festival.

An accomplished and famous actress, Ate Vi’s outstanding performance in government service was also widely recognized. She served for three consecutive terms as mayor of Lipa City and now on her second term as governor of Batangas. Among the awards and recognitions she received as a public servant were: Most Outstanding Mayor given by the Civil Service Commission in 2000; Outstanding Mayor in Region IV from the Asusasyon ng Komentarista at Anaunser sa Pilipinas; Best Over-all Local Council Performance by the Boy Scout of the Philippines in 2000; Sandugo Outstanding Local Government Executive from the Department of Health in 2002; Gawad Parangal Award from the Presidential Commission for Urban Poor in 2003; Hall of Fame Regional Sandugo Outstanding Mayor from the Department of Health Region IV-A in 2005; and Gawad Pangulo sa Kapaligiran-Component City Category from the Department of Interior and Local Government Region IV-A in 2005. But it is her being an empowered woman that makes her come into full circle as a person and as an artist. For in this newly found arena called politics, there are no scripts, no rehearsals, no cuts or retakes, For here she was to be judged for her worth beyond the help of makeup, props and sets, magical lights and special effects. For here she was to be measured by the strength of character, drive for competence, and will for compassion. Delicia Alfelor-Tibi, UNEP executive vice president, was all praised to Ate Vi saying that she serves as an exemplar of an empowered career woman whose character as an artist and leader is beyond question.

“In politics, there are no scripts, no rehearsals, no cuts or retakes, here she is to be judged for her worth beyond the help of makeup, props and sets, magical lights and special effects. Here she is to be measured by the strength of character, drive for competence, and will for compassion. Ate Vi passed those tests with flying colors,” Tibi said. She added that UNEP is truly honored and privileged to confer the honorary degree to Ate Vi as it will serve as a motivation and inspiration to the students to emulate her achievements as a Filipina who triumphed over the countless trials and challenges in her life. “Ate Vi is the epitome of what UNEP stands for. Just like her, we want our students not only to become global achievers but to achieve whatever they desire,” Tibi said. – Vox Bikol, November 19, 2009 (READ MORE)

Mayor Vilma Santos-Recto (she is now, the Governor of Batangas) was given an honorary degree of Doctor in Humanities by the Lipa City Public College (LCPC) last November 10, 2005. The Doctorate degree was given after resolution no. 01-05 of the Academic Council was passed. The head of the Academic Council, Dr. Armando Badillo and the Board of Trustees, including City Adminstrator Mr. Pedrito Martin M. Dijan, approved the resolution. The Commission on Higher Education (CHED) also approved the resolution on May 11, 2005. The resolution states that they acknowledge the leadership and talent of Mayor Vi not only in the art of Film, but also her sincerity and effective management as a Mayor and for being a good role model for a new Filipina, beautiful inside and out. It is further stressed in the resolution that the life of Mayor Vi as a public servant and as a multi-awarded actress clearly mirrors her deep understanding of how she can serve the public, her respect for human dignity and her genuine belief in the goodness of men to serve and help one another. Dr. Cristeto Pamplona, Schools division superintendent of DepEd Lipa; Atty. Joel Montealto, City Legal Officer; Lipa City Councilor Romy Macasaet and Ronaldo de Castro, City Personnel Officer completes the LCPC Academic Council. – Eric Nadurata, V magazine Vol 2 No 6 The Valentine’s Day Issue 2005 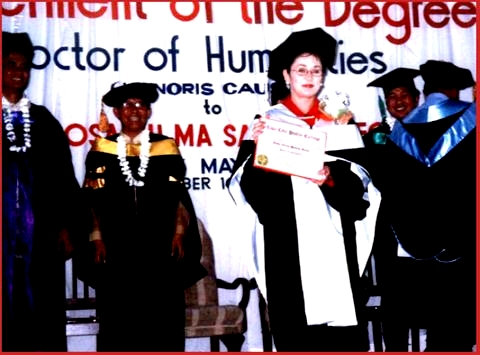