On May 1, 1976, ten Filipino critics agreed to discuss the annual award-giving situation in the local industry. All in agreement that there must be an alternative to FAMAS, the only award giving body in the Philippines. The ten critics, mostly academics, were Pio de Castro, Behn Cervantes, Pete Daroy, Mario Hernando, Bien Lumbera, Doy del Mundo, Manny Pichel, Nick Tiongson, Gino Dormiendo, and Nestor Torre. Most of them were part of FAMAS roster of judges. Most, questioned the recent years winners. According to the website, Wikepedia: “The 1972 best actress “tie” that materialized between major star Boots Anson-Roa and then-rising star Vilma Santos was a good example of the disillusionments experienced by the academics. according to them, the two winners was unheard of at that time, which resulted in accusations of lessening “credibility and prestige.” Ironically, Gawad will have numerous ‘tie” winners in their future set of winners, including a string of ‘tie” involving their early favorite, Nora Aunor. Headed by Nestor Torre, the nine critics agreed to review films and release quarterly film citations with the final nominations and winners announce at the end of the year.

Over the years, the Manunuri Ng Pelikulang Pilipino, MPP, (translates – Filipino Film Critics and considered the equivalent of the USA’s New York Film Critics Circle), established themselves as the most credible award giving bodies in the Philippines. They are known for having a long discussion for each of their award categories resulting sometimes in heated debate and unfortunately resulting with the unavoidable “ties” winners. Since 1976, the group has eluded controversies that rival groups endured. The oldest award, FAMAS has experienced two renegade or break away groups resulting in costly legal battles and low television ratings. Another group, the Philippine Movie Press Club is considered second to Gawad Urian, their Star Awards had a similar fate, they also had a break away group, creating their own awards, the Golden Screen Awards. With the advent of new awards, now ten, and still counting. Gawad Urian remained strong and the most sought after. Currently, the Manunuri are consists of: Rolando B. Tolentino, Grace Javier Alfonso, Butch Francisco, Mario A. Hernando, Bienvenido Lumbera, Miguel Q. Rapatan, Benilda S. Santos, Dr. Nicanor G. Tiongson, Tito Genova Valiente and Lito B. Zulueta.

Vilma Santos has become a big part of Gawad Urian. Although she wasn’t considered their early favourite, they developed a long fondness to the actress, many considered as the Meryl Streep of the Philippines cinema. Fourteen best actress nominations spanning three decades and eight wins starting in 1982’s Relasyon. She also recieved a Gawad Urian best picture award in 1978, as film producer for the film, Pagputi Ng Uwak Pagitim Ng Tagak.

In 1981 Gawad Urian cited four films for their best picture category, Romy Suzara’s Pepeng Shotgun, Mel Chionglo’s Playgirl, Mike de Leon’s Kisap Mata and Laurice Guillen’s Salome. Salome was the winner. The four directors were also nominated for best director together with Ishmael Bernal for Pabling. Guillen was the winner for Salome. In addition to picture and director awards, Salome also won the best screenplay for Ricardo Lee and the best actress award for Gina Alajar. Alajar’s strong competitors were Charito Solis for Playgirl and Nora Aunor for the forgettable Bakit Bughaw ang Langit. Vilma Santos were again got the cold shoulder from the Manunuri as she wasn’t even cited for any of her films, Pakawalan Mo Ako where she won a FAMAS, Hiwalay, a Romy Suzara directed film, Karma where she won the best actress from Metro Manila Film Festival or Ex-Wife, an Eddie Rodriguez directed film co-starring her with Beth Bautista. 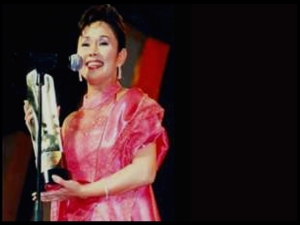 But a turned of events the following year. MPP considered 1982 a good harvest with a string of high quality films: Batch ’81, Himala, Moral, Oro Plata Mata and Relasyon, all vying for the best pictures Urian. Oro Plata Mata edged out the other four. It also won the best director honour for Peque Gallaga. Gallaga defeated Marilou Diaz-Abaya (Moral), Ishmael Bernal (Himala and Relasyon), Lino Brocka (Cain at Abel) and Mike de Leon (Batch ’81). The writing category went to Clodualdo del Mundo, Raquel Villavecencio at Mike de Leon for Batch ’81. Noticeably ignored many times by the Manunuri, Vilma Santos was nominated for her sympathetic mistress role in Relasyon. She is up against Nora Aunor’s epical role for Himala, Gina Alajar and Lorna Tolentino were nominated for their feminist film Moral completed the nominees. The Manunuri surprised everyone by declaring Vilma Santos as their 7th best actress winner. The other award giving bodies (FAMAS, Film Academy of the Philippines and CMMA) also declared Vilma Santos as their best actress and the term “grand slam” were born atleast in local entertainment industry. As for the other acting categories, Philip Salvador won the lead actor and Baby Delgado, supporting actress both for Cain At Abel, and Mark Gil won the supporting actor for Palipat-lipat, Papalit-palit. The Manunuri gave the Natatanging Gawad Urian to veteran actress, Anita Linda, who is still very active today and who worked with Vilma several times.

Proving that her win wasn’t just a fluke, Santos won the next two years for Broken Marriage and Sister Stella L both from Regal Films. Four years afterwards her three wins, she again got the best actress with co-winner, Nora Aunor in 1989’s Pahiram Ng Isang Umaga. She followed this with wins in 1991 (Ipagpatawad Mo), 1993 (Dahil Mahal Kita: The Dolzura Cortez Story), 1998 (Bata Bata Paano Ka Ginawa), and 2002 (Dekada 70). She also received the the Actress of the Decade 1990s award in 2000. – RV (READ MORE)